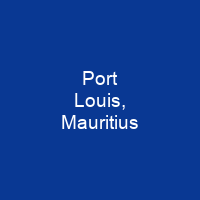 Port Louis is the capital city of Mauritius. It is the country’s economic, cultural and political centre. According to the 2012 census conducted by Statistics Mauritius, the population was 147,066. The city has a hot semi-arid climate under Köppen’s climate classification.

About Port Louis, Mauritius in brief

Port Louis is the capital city of Mauritius. It is the country’s economic, cultural and political centre, and most populous city. According to the 2012 census conducted by Statistics Mauritius, the population was 147,066. The economy of the city is mostly dominated by its financial centre, port facilities, tourism and the manufacturing sector. Port Louis is home to the biggest port facility in the Indian Ocean region and one of Africa’s major financial centers. The Mauritius Ports Authority, established by law in 1998, is the port authority responsible for Port Louis. The port is the only official port of entry and exit for sea vessels in Mauritius and ships must be cleared in the port before visiting any other anchorage in the island nation. The cruise ship terminal, named after Christian Christian Decotter, opened in 2010 and illustrates the increasing role of tourism in the Mauritius economy. In 2019, the port capacity was 1 million TEUs, with over 2,200 annually visiting the port at the end of the year. The city has a hot semi-arid climate under Köppen’s climate classification. Its wettest months are from December through April where on average 60 mm of rain falls during each of these months. The city also shows a noticeable range of average temperatures. During the height of the wet season, the city sees its highest temperatures where average high temperatures are usually around 30 °C. The city’s coolest temperatures are seen mid-year where averagehigh temperatures are around 24 °C.

The Port is named in honor of King Louis XV. The harbor adjoins the main city, with the port currently comprising three terminals. Terminal I contains a total of 1180 meters of quays with six berthing positions for cargo, passengers, and fishing boats. Terminal II includes specialized facilities for handling and storing sugar, fish, tallow, and caustic soda. Also present in Terminal II is a dedicated 124-meter cruise ship jetty, with a dredged depth of 10 metres. Terminal III has two 280-meter quays, having two super-post and specialized for handling container ships, having eight gantry cranes and five post-post-Panamax ships. Overall the port contributes 2% to the GDP of the country, and 1% to its cruise ship industry. It also has storage facilities for bulk ethanol and ethanol and tie-in points for large reefer containers too large to dock at the quays at the Outer Anchorage, which is still within the official boundaries of the port. In the late 1990s, expansion of the tourism industry led to considerable development in Port Louis, with many shops, hotels, and restaurants being built in the Caudan Waterfront area. Port Louis was selected to house both the main harbor and fort for the island. During this period of French colonization, Mauritius was known as Ile de France. The French governor at that time, Bertrand-François Mahé de La Bourdonnais, contributed to the development of the City.

You want to know more about Port Louis, Mauritius?

This page is based on the article Port Louis, Mauritius published in Wikipedia (as of Dec. 29, 2020) and was automatically summarized using artificial intelligence.