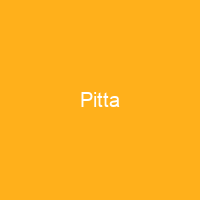 Pittas are a family of passerine birds found in Asia, Australasia and Africa. Four species are listed as endangered by the International Union for Conservation of Nature. A further nine species are vulnerable and several more are near-threatened. The name pitta is derived from the word pitta in the Telugu language of South India meaning’small bird’

About Pitta in brief

Pittas are a family of passerine birds found in Asia, Australasia and Africa. There are thought to be 40 to 42 species of pittas, all similar in general appearance and habits. Pittas are medium-sized by passerine standards, at 15 to 25 cm in length, and stocky, with strong, longish legs and long feet. They have very short tails and stout, slightly decurved bills. Most pitta species are tropical; a few species can be found in temperate climates. The number of pitta genera has varied considerably since Vieillot, ranging from one to nine as many as nine species. Four species are listed as endangered by the International Union for Conservation of Nature; a further nine species are vulnerable and several more are near-threatened. They are popular with birdwatchers because of their bright plumage and the difficulty in seeing them. The main threat to them is habitat loss in the form of rapid deforestation, but they are also targeted by the cage-bird trade. The name pitta is derived from the word pitta in the Telugu language of South India meaning \”small bird\”. The family’s closest relatives have for a long time been assumed to be the other suboscine birds, and particularly the Old World suboscines; the broadbills, asities and the New World sapayoa. These arboreal relatives were formerly treated as two families, and are now either combined into a single taxon or split into four.

A 2006 study confirmed that these were indeed the closest relatives of the pitta. The clade they form, the Eurylaimides, is one of the two infraorders ofSuboscines, which are one of three suborders of the passerine bird. The most ancestral home and the most common place for the pitta to live was Africa. The study found that the species diverged from the Smithornis and Calyptomena 24 to 30 million years ago, during the Oligocene, and spread through Asia before the oscines reached the Old world. The pitts are monogamous and females lay up to six eggs in a large domed nest in a tree or shrub, or sometimes on the ground. Both parents care for the young. The species are highly terrestrial and mostly solitary, and usually forage on wet forest floors in areas with good ground cover. They eat earthworms, snails, insects and similar invertebrate prey, as well as small vertebrates. The genus Pitta has been split into three genera: Pitta, Erythropitta and Hydrornis. In 1863 Daniel Elliot Elliot split the Pittidae into two genera, Pitta and Brachyurus for the species with comparatively long tails and shorter tailed species for the shorter-tailed species. In 1816 Louis VieillOT moved it to the new genus PittA. In 1764 George Edwards described the Indian pitta, which was described and illustrated by George Edwards in 1764.

You want to know more about Pitta?

This page is based on the article Pitta published in Wikipedia (as of Nov. 14, 2020) and was automatically summarized using artificial intelligence.