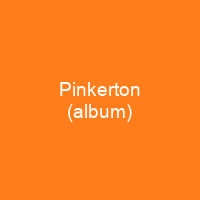 Pinkerton is the second studio album by American rock band Weezer. It was released on September 24, 1996 by DGC Records. The album is named after the character BF Pinkerton from Giacomo Puccini’s 1904 opera Madama Butterfly. The band recorded the album between Rivers Cuomo’s terms at Harvard University, where he wrote most of the songs.

About Pinkerton (album) in brief

Pinkerton is the second studio album by American rock band Weezer. It was released on September 24, 1996 by DGC Records. The album is named after the character BF Pinkerton from Giacomo Puccini’s 1904 opera Madama Butterfly, whom Cuomo described as an “asshole American sailor similar to a touring rock star” Pinkerton debuted at number nineteen on the US Billboard 200. It received mixed reviews and did not meet sales expectations. However, Pinkerton went on to achieve wide acclaim; it was certified platinum in 2016, and several publications have named it one of the best albums of all time. The band recorded the album between Rivers Cuomo’s terms at Harvard University, where he wrote most of the songs. To better capture their live sound, Weezers self-produced Pinkerton, creating a darker, more abrasive album than their self-titled 1994 debut. The songs were written while Cuomo was at Harvard, chronicling his loneliness and frustration, or what Cuomo referred to as his “dark side” It was the last album to feature bassist Matt Sharp, who left the band after the release of Return of the Rentals in 1996. In January 1996, Cuomo, Brian Bell, Patrick Wilson and Matt Sharp worked on material for their bands the Space Twins and the Goodness Goodness, respectively. In March 1995, Cuomo had extensive leg surgery to lengthen his right leg, followed by painful physiotherapy sessions. This affected his songwriting, as he would spend long periods hospitalized, unable to walk without the use of a cane, and under the influence of painkillers.

Cuomo was born with one leg shorter than the other. He would later write about his disillusionment with the rock lifestyle, writing: “You will meet two hundred people every night, but each conversation will generally last approximately thirty seconds, and consist of you trying to convince them that no, you do not want their underwear, then you will be alone again, in your motel room. Then you’ll be on your bus, trying to kill the nine hours it takes to get to the next city, whichever city it is. This is the life of a rock star.” In 1995, the band decided against hiring a producer to capture the band’s better live sound; they decided to record the album in tandem around three microphones rather than overdubbing them separately. They hoped to explore “deeper, darker stuff” which they felt was the best way to sound like themselves. In 1996, during Cuomo’s winter break from Harvard, he worked on the vocals for the debut album by his band Rentals, which was released the following year. He also worked on side projects with the Return of The Rentals and returned to Harvard to study classical composition. By May 1996, the songwriting had become “darker, more visceral and exposed, less playful”, and the Songs from the Black Hole concept was abandoned. The group decided to name their next album Pinkerton.

You want to know more about Pinkerton (album)?

This page is based on the article Pinkerton (album) published in Wikipedia (as of Dec. 05, 2020) and was automatically summarized using artificial intelligence.