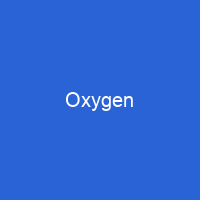 Two atoms of the element bind to form dioxygen, a colorless and odorless diatomic gas with the formula O2. Common uses of oxygen include production of steel, plastics and textiles, brazing, welding and cutting of steels and other metals.

About Oxygen in brief

Oxygen is the third-most abundant element in the universe by mass. At standard temperature and pressure, two atoms of the element bind to form dioxygen, a colorless and odorless diatomic gas with the formula O2. Common uses of oxygen include production of steel, plastics and textiles, brazing, welding and cutting of steels and other metals, rocket propellant, oxygen therapy, and life support systems in aircraft, submarines, spaceflight and diving. Oxygen was isolated by Michael Sendivogius before 1604. It is commonly believed that the element was discovered independently by Carl Wilhelm Scheele, in Uppsala, in 1773 or earlier, and Joseph Priestley in Wiltshire. The name oxygen was coined in 1777 by Antoine Lavoisier, who first recognized oxygen as a chemical element and correctly characterized the role it plays in combustion. One of the first known experiments on the relationship between combustion and air was conducted by the 2nd century BCE Greek writer on mechanics, Philo of Byzantium. In his work Pneumatica, he observed that inverting a vessel over a burning candle and surrounding the vessel’s neck with water resulted in some water rising into the neck. Philo incorrectly surmised that parts of the air in the vessel were converted into the classical element fire and thus were able to escape through pores in the glass. Many centuries later Leonardo da Vinci built on Philo’s work by observing that a portion of air is consumed during combustion and respiration.

In the late 17th century, Robert Boyle proved that air is necessary for combustion. English chemist John Mayow refined this work by showing that fire requires only a part of air that he called spiritus nitroaereus. This may have been in part due to the philosophy of combustion and corrosion called phlogiston theory, which was then favored by the German alchemist J. J. Becher. One part of oxygen was given off when the substance was modified by Ernst Stahl by 1731 by the chemist Ernst Becher and modified by Georg Stahl, and given the nickname “phlogiston” Oxygen is a highly reactive nonmetal, and readily forms oxides with most elements as well as with other compounds. Diatomic oxygen gas constitutes 20.95% of the Earth’s atmosphere. It also makes up almost half of theEarth’s crust in the form of oxides. The high-altitude ozone layer helps protect the biosphere from ultraviolet radiation. However, ozone present at the surface is a byproduct of smog and thus a pollutant, and is thus a pollutants. It was discovered in 1668 in the work Tractatus tracte de respiratione, by Robert Borch, Mikhail Borch and Pierre Bayomonosov, but none of them produced oxygen in experiments in the 17th and 18th century but recognized it as a chemical element in 18th century.

You want to know more about Oxygen?

This page is based on the article Oxygen published in Wikipedia (as of Dec. 03, 2020) and was automatically summarized using artificial intelligence.