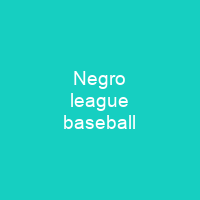 The first known baseball game between two black teams was held on November 15, 1859, in New York City. The first known professional black baseball player was Bud Fowler, who appeared in a handful of games in April 1878. In 1885, the Cuban Giants formed the first black professional baseball team. In 1888, the last season blacks were permitted in any minor league or any other high league, but the last black club was the Philadelphia Orions.

About Negro league baseball in brief

The first known baseball game between two black teams was held on November 15, 1859, in New York City. By the end of the 1860s, the black baseball mecca was Philadelphia, which had an African-American population of 22,000. The last professional club, the Indianapolis Clowns, operated as a humorous sideshow rather than competitively from the mid-1960s to the 1980s. In December 2020, Major League Baseball announced that it was classifying the seven \”Negro Major Leagues\” as major leagues, recognizing statistics and approximately 3,400 players who played from 1920 to 1948. The first known professional black baseball player was Bud Fowler, who appeared in a handful of games in April 1878 and then pitched for the Lynn, Massachusetts club in the Massachusetts Association Association. In 1885, the Cuban Giants formed the first black professional baseball team. The black World Series was referred to as the Colored World Series from 1924 to 1927, and the Negro World series from 1942 to 1948, but by about 1970, the term ‘Negro’ had fallen into disfavor. In some ways Blackball thrived under segregation, with the few black teams of the day playing not only each other but white teams as well. Black teams earned the bulk of their income playing white independent’semipro’ clubs. The National Association for the Advancement of Colored People petitioned the public to recognize a capital ‘N’ in negro as a matter of respect for black people. By 1930, essentially every major US outlet had adopted\’Negro\’ as the accepted term for blacks.

The term may be used broadly to include professional black teams outside the leagues and it may be use narrowly for the seven relatively successful leagues beginning in 1920 that are sometimes termed ‘Negros’ The first nationally known black baseball team was the Keystone Orions of Philadelphia in 1885. Several other black players joined the International League the following season, including pitchers George Stovey and Robert Higgins. In 1888, the last season blacks were permitted in any minor league or any other high league, but the last black club was the Philadelphia Orions. The Negro American League of 1951 is generally considered the last major league season. It was organized strictly as a minor league but failed in 1887 after only two weeks owing to low attendance. It is the only major league to have ever had a black player, and it was the first to have a black manager. It has been called ‘the most successful minor league in the history of baseball’ and one of the most successful professional leagues in the United States. It began in 1920 and ended in 1948, when it was merged with the Negro Leagues to form the Negro National Leagues. It’s the first major league league to be known as ‘the Negro National League’ (NLL) The first black player was Wilberforce Walker and his brother, Welday Walker, both played for the Toledo Blue Stockings in the major leagues in 1884 and 1886.

You want to know more about Negro league baseball?

This page is based on the article Negro league baseball published in Wikipedia (as of Dec. 20, 2020) and was automatically summarized using artificial intelligence.