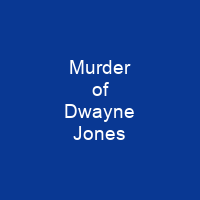 Dwayne Jones, 16, was beaten, stabbed, shot, and run over with a car. He had attended a dance party dressed in women’s clothing. Jones was known among friends as ‘Gully Queen’, a reference to storm drainage systems in which many homeless LGBT Jamaicans live.

About Murder of Dwayne Jones in brief

Dwayne Jones was a Jamaican 16-year-old boy who was killed by a violent mob in 2013, after he attended a dance party dressed in women’s clothing. Perceived as effeminate, Jones was bullied in school and, at the age of 14, was forced out of his family home by his father. He moved into a derelict house in Montego Bay with transgender friends. When some men at the party discovered that the cross-dressing Jones was not a woman, they confronted and attacked him. Jones was beaten, stabbed, shot, and run over with a car; he died in the early hours of the morning. Police investigated the murder but did not arrest or charge anyone for the crime, which remains unsolved. In 2006, Time magazine said that Jamaica may be the most homophobic country in the world. The country’s laws criminalising same-sex activity between males were introduced in 1864, during the British colonial administration. According to the Sexual Offences Act of 2009, any man convicted under these laws must register as a sex offender. These laws have been cited as contributing to wider homophobic attitudes among the Jamaican populace, including the view that gay people are criminals regardless of whether or not they have committed any criminal act. Anti-LGBT perspectives have been furthered by the island’s conservative Christian churches.

In the mid-2000s, two of Jamaica’s best-known LGBT rights activists, Brian Williamson and Steve Harvey, were murdered. In 2013, Human Rights Watch carried out five weeks of fieldwork among Jamaica’s LGBT community, reporting that over half of those interviewed had experienced violence as a result of their sexual orientation or gender identity, sometimes on more than one occasion. The event made newspaper headlines in Jamaica and was also the subject of reporting in both the United Kingdom and the U.S. The incident attracted national and international media attention and brought increased scrutiny to the status of LGBT rights in Jamaica. In the wake of the attack, both domestic and international organisations devoted to LGBT rights and human rights asked the Jamaicans for Justice, and the Jamaica Forum for Lesbians, All-Sexuals & Gays, for a proper investigation and legal recognition ofLGBT rights on the island. Jones was known among friends as ‘Gully Queen’, a reference to the storm drainage systems in which many homeless LGBT Jamaicans live. Friends noted that Jones desired to become a teacher or to work in the tourist industry, and had won a local dancing competition. He was known as ‘a diva’ who was ‘always very feisty and joking around’ and ‘a bit of a diva’, according to friends.

You want to know more about Murder of Dwayne Jones?

This page is based on the article Murder of Dwayne Jones published in Wikipedia (as of Dec. 03, 2020) and was automatically summarized using artificial intelligence.