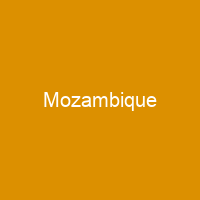 Mozambique is a country located in Southern Africa. It is bordered by the Indian Ocean to the east, Tanzania to the north, Malawi and Zambia to the northwest, Zimbabwe to the west, and Eswatini and South Africa to the southwest. The capital and largest city is Maputo. The country’s population of around 29 million is composed of overwhelmingly Bantu people.

About Mozambique in brief

Mozambique is a country located in Southern Africa. It is bordered by the Indian Ocean to the east, Tanzania to the north, Malawi and Zambia to the northwest, Zimbabwe to the west, and Eswatini and South Africa to the southwest. The capital and largest city is Maputo. The country’s population of around 29 million is composed of overwhelmingly Bantu people. Mozambique’s economy is based largely on agriculture, but industry is growing, mainly food and beverages, chemical manufacturing and aluminium and petroleum production. South Africa is Mozambiques main trading partner and source of foreign direct investment, while Belgium, Brazil, Portugal and Spain are also among the country’s most important economic partners. The nation is one of the poorest and most underdeveloped countries in the world, ranking low in GDP per capita, human development, measures of inequality and average life expectancy. The only official language is Portuguese, which is spoken mostly as a second language by about half the population. The largest religion in Mozambique is Christianity, with significant minorities following Islam and African traditional religions. It was named Moçambique by the Portuguese after Mussa Bin Bique, an Arab trader who first visited the island and later lived there. It’s believed between the 1st and 5th centuries AD, waves of migration from the west and north went through the Zambezi River valley and then gradually into the plateau and coastal areas of southern Africa. The voyage of Vasco da Gama in 1498 marked the arrival of the Portuguese, who began a gradual process of colonisation and settlement in 1505.

The island-town was the capital of the Portugal colony until 1898, when it was moved south to Lourenço Marques. The first iron communities on her south coast were established by the ancient port town of Chibuene in the 9th century AD. In the late medieval period, these towns were frequented by traders from Somalia, Ethiopia, Egypt, Arabia, Persia, and India. Particularly important were the regional towns with gold merchants from both the African interior and the broader Indian Ocean. In the 15th century, Mozambica, Sofoche, Angoche, and Mozambala Island were regional powers by the regional powers and traded with both the Indian and broader African interior. Since 2001, Moz Ambique’s annual average GDP growth has been among the world’s highest. It has since remained a relatively stable presidential republic, although it still faces a low-intensity insurgency. In 1994, the country held its first multiparty elections, and has since been a relativelystable presidential republic. The last multiparty election was held in 2000, and the country is now a member of the United Nations, the African Union, the Commonwealth of Nations and the Non-Aligned Movement, the Southern African Development Community, and is an observer at La Francophonie. There are no plans to hold another election in the next few years, but the country may hold a referendum in 2015.

You want to know more about Mozambique?

This page is based on the article Mozambique published in Wikipedia (as of Dec. 07, 2020) and was automatically summarized using artificial intelligence.