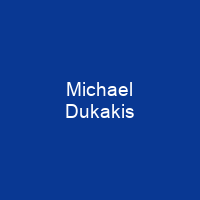 Michael Stanley Dukakis is a retired American politician and lawyer. He served as the 65th governor of Massachusetts, from 1975 to 1979 and again from 1983 to 1991. He is the longest-serving governor in Massachusetts history and only the second Greek-American governor in U.S. history, after Spiro Agnew. He was nominated by the Democratic Party for president in the 1988 election.

About Michael Dukakis in brief

Michael Stanley Dukakis is a retired American politician and lawyer. He served as the 65th governor of Massachusetts, from 1975 to 1979 and again from 1983 to 1991. He is the longest-serving governor in Massachusetts history and only the second Greek-American governor in U.S. history, after Spiro Agnew. He was nominated by the Democratic Party for president in the 1988 election, losing to the Republican nominee, Vice President George H. W. Bush. He has also served on the board of directors for Amtrak and has taught political science at Northeastern University and UCLA. In 2012, he backed the successful Senate campaign of Elizabeth Warren. He also served as an Eagle Scout and recipient of the Distinguished Eagle Scout Award from the Boy Scouts of America. His father Panos was a Greek immigrant from Lesbos, and his mother Euterpe was born in Larissa, to Aromanian Greek parents from Vrysochori. He graduated from Swarthmore College in 1955 with a B. A. in political science. He then received his J. D. degree from Harvard Law School in 1960. In 1970, he was the Democratic nominee for lieutenant governor on a ticket lead by Boston mayor Kevin White. However, the Democratic ticket lost the 1970 gubernatorial election. After losing his bid for lieutenantGovernor, he returned to the private sector, practicing law and becoming a partner at Hilllow and Dargent. In 1966, he unsuccessfully ran for Attorney General of Massachusetts. He won the 1974 Massachusetts gubernatorial election but lost his 1978 bid for re-nomination to Edward J.

King. In 1982, he defeated King in the 1982 gubernatorial primary and served as governor from1983 to 1991, presiding over a period of economic growth known as the \”Massachusetts Miracle\”. Building on his popularity as governor, he sought the Democratic presidential nomination for the 1988 presidential election. He prevailed in the Democratic primaries and was formally nominated at the 1988 Democratic National Convention. He lost the election, carrying only ten states and Washington, D.C., but he improved on the Democratic performances in the previous two elections. He later pledged to dismantle the powerful Metropolitan District Commission, a bureaucratic enclave that served as home to hundreds of political employees. In addition to its own police force, the MDC had its own maritime patrol force, which provided it with an enormous budget for it’s enormous budget. In 2009, Dukaki was mentioned as a potential appointee to the Senate in 2009 to fill the vacancy caused by Ted Kennedy’s death, but Governor Deval Patrick chose Paul G. Kirk. He died of a heart attack in 2011. He had served four terms in the Massachusetts House of Representatives between 1962 and 1970. He previously served as a Town Meeting Member in the town of Brookline, Massachusetts, as well as a member of the Massachusetts Board of Education. In 1996, he became a part of a group that helped form the Massachusetts Democratic Party’s platform for the 2008 presidential campaign.

You want to know more about Michael Dukakis?

This page is based on the article Michael Dukakis published in Wikipedia (as of Dec. 06, 2020) and was automatically summarized using artificial intelligence.