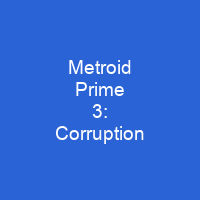 Metroid Prime 3: Corruption is a first-person action-adventure video game developed by Retro Studios and published by Nintendo for the Wii video game console. The player controls the protagonist, Samus Aran, using the Wii Remote and Nunchuk devices. The game was first shown to the public at the E3 2005 trade show. More than one million copies of the game were sold in 2007.

About Metroid Prime 3: Corruption in brief

Metroid Prime 3: Corruption is a first-person action-adventure video game developed by Retro Studios and published by Nintendo for the Wii video game console. It is the third main installment in the Metroid Prime series. The player controls the protagonist, Samus Aran, using the Wii Remote and Nunchuk devices. The game was first shown to the public at the E3 2005 trade show. More than one million copies of the game were sold in 2007. It was re-released in August 2009 as part of Metroid Prime: Trilogy, a Wii compilation of the three main games of the Prime series with Wii Remote controls. Retro announced that Corruption would be the closing chapter of the series; however, the next main installment, Metroid Prime 4, was announced in June 2017 and is currently in development. gameplay revolves around solving puzzles to uncover secrets, jumping on platforms, and shooting enemies with the help of a \”lock-on\” mechanism that allows Samus to move in a circle while staying aimed on an enemy. After a certain amount of time, the player will enter Corrupt Hypermode, and if not stopped leads to a non-standard game over due to Samus being overtaken by the Phazon. Another new feature is the Command Visor, which allows the player to summon her gunship from a suitable landing site to travel to another destination, or travel quickly to a new destination. During the game, new abilities can be obtained to allow it to perform aerial attacks against enemy targets and transport heavy objects.

The Screw Attack power-up lets Samus use her suit to emit strange energy waves as she performs a continuous jump. The heads-up display simulates the inside of Samus’ helmet, and features a radar, map, ammunition gauge and health meter. It also includes a hint system that periodically displays on-screen instructions and navigation assistance. The game also has the addition of the Hyper mode, a feature in which health is drained to give temporary invincibility and more powerful attacks. The events in Corruption take place six months after Metroid Prime 2: Echoes, with Samus seeking to gain power by defeating the Space Pirates to gain the first power of the Zebes. It takes place across several planets, each with regions connected by elevators, rail systems and bridges, and each with rooms separated by doors that can be opened when shot with the correct weapon. In Morph Ball mode, in which Samus’s suit transforms into an armored ball and the game uses a third-person camera, the player can use the Grapple Beam to attach onto and pull objects, such as enemy shields or certain doors. The Wii Remote allows the players to execute actions such as jumping, aiming, and firing weapons, while the NunchUK enables actions suchas moving Samus and locking on to enemies and targets. It has been released in North America and Europe in 2007 and in Japan the following year, and it was released in Japan in 2008.

You want to know more about Metroid Prime 3: Corruption?

This page is based on the article Metroid Prime 3: Corruption published in Wikipedia (as of Dec. 07, 2020) and was automatically summarized using artificial intelligence.