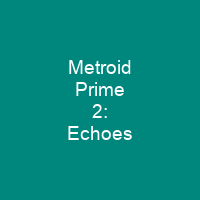 Metroid Prime 2: Echoes is a first person action-adventure video game developed by Retro Studios and published by Nintendo for the GameCube. It is the first game in the series with a multiplayer feature. The game’s single player mode and graphics were praised by critics, while its steep difficulty level and multiplayer components were met less positively. Over 800,000 copies of the game were sold worldwide.

About Metroid Prime 2: Echoes in brief

Metroid Prime 2: Echoes is a first person action-adventure video game developed by Retro Studios and published by Nintendo for the GameCube. It is the first game in the series with a multiplayer feature. The game’s single player mode and graphics were praised by critics, while its steep difficulty level and multiplayer components were met less positively. Echoes has received several video game industry awards, as well as spots on top games lists by Nintendo Power and IGN. Over 800,000 copies of the game were sold worldwide. In 2009, an enhanced version was released for Wii as a standalone game in Japan and as part of Metroid Prime: Trilogy internationally. The player controls the protagonist Samus Aran from a first-person perspective, and it takes place in an open-ended world with interconnected regions. Echoes feature two parallel dimensions, Light Aether and Dark Aether, where changes in either dimension often reflect changes in the other. Progress through the game requires both dimensions to be explored, using power-ups that Samus acquires over time. Equipment players collect include the Screw Attack, which allows Samus to somersault in midair and off certain surfaces, and new beam weapons that have limited ammunition. The head-up display simulates the inside of Samus’s helmet and features a radar, map, missile ammunition meter and health meter. Several visors are available, and each performs a different function. One, also seen in the previous game, is a scanner that searches for enemy weaknesses, interfaces with mechanisms such as force fields and elevators and retrieves text entries from certain sources.

The others reveal and highlight interdimensional objects or cloaked enemies, and create a visual representation of sound. The split-screen multiplayer mode allows up to four players to engage in combat using a split screen. It has six arenas and two modes: Deathmatch, in which players attempt to kill their opponents as many times as possible within a set amount of time; and Bounty, which focuses on collecting coins that injured characters drop. Echoes takes place on a rogue planet in the Dasha region, Aether, inhabited by a race known as the Luminoth. Five decades before the game’s events, a Phazon meteor collides into the planet and leaves a scar causing environmental damage and splitting the energy. The planet has a poisonous atmosphere that is dark, arid, and has a shapeshifting creature that is able to possess the living bodies of the dead. The Luminoth live peacefully, protecting the planet’s pure natural energy, which they call the “Light of Aether\”. Five decades later, the planet is taken over by the Ing, a race that came from an alternate dimension of Aether. Samus must travel to three temples to ensure the destruction of the Ing while battling Space Pirates and her mysterious doppelgänger called Dark Samus. Around this time, Space Pirates set up a base on the planet, which is capable of destroying the other race’s energy—whichever it controls.

You want to know more about Metroid Prime 2: Echoes?

This page is based on the article Metroid Prime 2: Echoes published in Wikipedia (as of Dec. 07, 2020) and was automatically summarized using artificial intelligence.