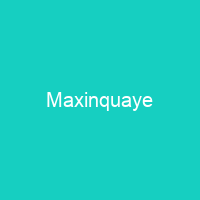 Maxinquaye is the debut album by English rapper and producer Tricky. It was released on 20 February 1995 by 4th & B’way Records. It reached the number three position on the United Kingdom’s albums chart and sold over 100,000 copies in its first few months of release. It is regarded as a significant influence on electronica, underground hip hop and British hip hop.

About Maxinquaye in brief

Maxinquaye is the debut album by English rapper and producer Tricky. It was released on 20 February 1995 by 4th & B’way Records. In the years leading up to the album, Tricky had grown frustrated with his limited role in the musical group Massive Attack and wanted to pursue an independent project. Shortly after, he discovered vocalist Martina Topley-Bird – who he felt would offer another dimension to his lyrics. Tricky produced the album alongside Mark Saunders, who helped him use dub production techniques and heavily altered samples taken from a variety of sources. Maxinquaye reached the number three position on the United Kingdom’s albums chart and sold over 100,000 copies in its first few months of release. Since then, it has sold more than 500,00 copies worldwide and ranks frequently on lists of the greatest albums. It is regarded as a significant influence on electronica, underground hip hop and British hip hop. The record’s groove-oriented and low-tempo sound incorporates elements from hip hop, soul, rock, ambient techno, reggae and experimental music. The lyrics explore themes of cultural decline, dysfunctional sexual relationships, fear of intimacy and recreational drug use, as he drew on his experiences in British drug culture and the influence of his late mother Maxine Quaye, after whom the album is titled. The album was cited by many journalists as the year’s best record and the key release of the burgeoning trip hop genre.

The Wild Bunch signed a record deal with 4th and B’Way Records and released two singles, but their slow, experimental sound failed to make a commercial impact. The collective dissolved in 1989, which led to a few of its members forming the group Massive attack, with Tricky a frequent collaborator who rapped over their productions. He later reworked material he had written for Massive Attack on Max Inquaye. The first half of 1994 was recorded at Tricky’s home studio in Kilburn; further recording took place at the Loveshack and Eastcote studios in Notting Hill. The Cure were impressed by his work with Maxinquaye and recorded their albums Mixed Up and Wish. They recorded their album Mixed Up on 4th&B’way’s parent label 4th’Way’s parent company, 4th B’ Way Records. The band later appeared on the song ‘Aftermath’ – later on the album Blue Lines. The song has not appeared on Massive Attack, who were interested in including it on their record Blue Lines before Tricky signed a deal with the record label. The group has since appeared on several other albums, including The Cure’s ‘Mixed Up’ and ‘The Cure on Blue Lines’ and The Cure on Mixed Up. The duo have a daughter, Toni, who was born in 1994 and has appeared on a number of other albums. The pair have a son, Jack, who lives in the US with his father, Mark Stewart, and a daughter who is also called Toni.

You want to know more about Maxinquaye?

This page is based on the article Maxinquaye published in Wikipedia (as of Dec. 05, 2020) and was automatically summarized using artificial intelligence.