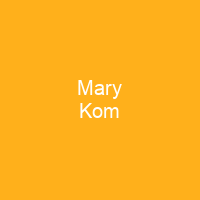 Mangte Chungneijang Mary Kom is an Indian amateur boxer and incumbent Member of Parliament, Rajya Sabha. She is the only female to become World Amateur Boxing champion for a record six times. She was awarded the Padma Vibhushan, India’s second highest civilian award, in 2020.

About Mary Kom in brief

Mangte Chungneijang Mary Kom ) is an Indian amateur boxer and incumbent Member of Parliament, Rajya Sabha. She is the only female to become World Amateur Boxing champion for a record six times. She became the first Indian female boxer to win a gold medal in the Asian Games in 2014 at Incheon, South Korea. She was awarded the Padma Vibhushan, India’s second highest civilian award, in 2020. After her sixth world title in 2018, the Government of Manipur has conferred on her the title \”Meethoi Leima\”, loosely translated as great or exceptional lady in a felicitation ceremony held in Imphal on 11 December 2018. Kom was born in Kangathei village, Moirang Lamkhai in Churachandpur district of rural Manipur in India. Her parents, Mangte Tonpa Kom and Mangte Akham Kom were tenant farmers who worked in jhum fields. Kom grew up in humble surroundings, helping her parents with farm related chores, going to school and learning athletics initially and later boxing simultaneously. In school, Kom participated in all types of sports including volleyball, football and athletics. It was the success of Dingko Singh that inspired her to switch from athletics to boxing in 2000.

Kom studied at the Loktak Christian Model High School at Moirangs up to her sixth standard and thereafter attended St. Xavier Catholic School,Moirang, up to class VIII. After standard VIII, Kom moved to Adimjati High School, Imphal, for her schooling for class IX and X, but was unable to pass the matriculation exam. Not wishing to reappear for them, she quit her school and gave her examination from NIOS and graduation from Churchandpur College. In 2010, Kom won a silver medal at the Asian Boxing Championship in Vietnam. She won a fourth successive gold medal at the AIBA Women’s World Championship in China in 2009. Kom took a short hiatus from boxing and after her marriage, Kom again started training and became a boxing coach. In 2012, she became the only Indian female. boxer to have qualified for the 2012 Summer Olympics, competing in the flyweight category and winning a bronze medal. Kom is also the only boxer to become Asian Amateur Boxing Champion for a Record Six times. In March 2017, the Ministry of Youth Affairs and Sports, Government of India, appointed Mary Kom and Akhil Kumar as national observers for boxing.

You want to know more about Mary Kom?

This page is based on the article Mary Kom published in Wikipedia (as of Nov. 30, 2020) and was automatically summarized using artificial intelligence.