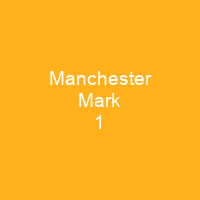 The Manchester Mark 1 was one of the earliest stored-program computers. It was developed at the Victoria University of Manchester from the Manchester Baby. A program written to search for Mersenne primes ran error-free for nine hours on the night of 1617 June 1949. Thirty-four patents resulted from the machine’s development.

About Manchester Mark 1 in brief

The Manchester Mark 1 was one of the earliest stored-program computers. It was developed at the Victoria University of Manchester from the Manchester Baby. Work began in August 1948, and the first version was operational by April 1949. A program written to search for Mersenne primes ran error-free for nine hours on the night of 1617 June 1949. Thirty-four patents resulted from the machine’s development, and many of the ideas behind its design were incorporated in subsequent commercial products such as the IBM 701 and 702. The machine was scrapped towards the end of 1950, replaced in February 1951 by a Ferranti Mark 1, the world’s first commercially available general-purpose electronic computer. The computer is especially historically significant because of its pioneering inclusion of index registers, an innovation which made it easier for a program to read sequentially through an array of words in memory. The chief designers, Frederic C. Williams and Tom Kilburn, concluded from their experiences with the Mark 1 that computers would be used more in scientific roles than in pure mathematics. In 1951, they started development work on Meg, the Mark 1’s successor, which would include a floating point unit and was also called the Manchester Automatic Digital Machine, or MADM. The Mark 1 ran for five years from 1948 to 1950, and involved an estimated £35,000 per year in development. The project had the dual purpose of supplying Ferrant i with a design on which to base their commercial machine, and supplying the government with a base for the commercial version of the machine.

The UK Government Chief Scientist Ben Lockspeiser was so impressed by what he saw that he immediately initiated a government contract with the local firm of Ferrantsi to make a commercial version. From that point on, development had the additional purpose of constructing an electronic calculating machine to construct an EDVAC. The Manchester Baby had been designed by the team of Frederic Williams, Geoff Tootill and Thomas Thomas; they were joined by two students, D B G Edwards and G Edward Thomas; the project soon became a dual purpose. The Baby and the Mark1 differed primarily in their use of Williams tubes as memory devices, instead of mercury delay lines. Early electronic computers were generally programmed by being rewired, or via plugs and patch panels; there was no separate program stored in memory, as in a modern computer. In 1936, mathematician Alan Turing published a definition of a theoretical \”universal computing machine\”, a computer which held its program on tape, along with the data being worked on. During the 1940s, Turing and others such as Konrad Zuse developed the idea of using the computer’s own memory to hold both the program and data. The practical construction of a von Neumann computer depended on the availability of a suitable memory device. It could take several days to reprogram ENIAC, for instance, It was also being developed by other researchers, notably the National Physical Laboratory’s Pilot ACE, Cambridge University’s EDSAC, and the US Army’s EDVac.

You want to know more about Manchester Mark 1?

This page is based on the article Manchester Mark 1 published in Wikipedia (as of Dec. 03, 2020) and was automatically summarized using artificial intelligence.