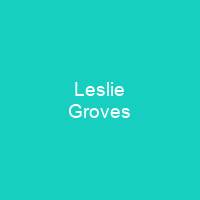 Lieutenant General Leslie Richard Groves Jr. was a U.S. Army Corps of Engineers officer. He directed the Manhattan Project, a top secret research project that developed the atomic bomb during World War II. He left the Army in 1947 and went on to become a vice-president at Sperry Rand. He died of a heart attack in Los Angeles, California, in 1998.

About Leslie Groves in brief

Lieutenant General Leslie Richard Groves Jr. was a U.S. Army Corps of Engineers officer. He directed the Manhattan Project, a top secret research project that developed the atomic bomb during World War II. Groves was born in Albany, New York, on 17 August 1896, the third son of four children of a pastor and his wife Gwen née Griffith. He was half Welsh and half English, with some French Huguenot ancestors who came to the United States in the 17th century. His father was a United States Army chaplain who served in Cuba, the Philippines, and the Boxer Rebellion. He graduated fourth in his class at the U. S. Military Academy at West Point in 1918 and was commissioned into the Army Corps Of Engineers. In 1929, he went to Nicaragua as part of an expedition to conduct a survey for the Inter-Oceanic Nicaragua Canal. He attended the Command and General Staff School at Fort Leavenworth, Kansas, in 1935 and 1936; and the Army War College in 1938 and 1939. In 1940 he became special assistant for construction to the Quartermaster General, tasked with inspecting construction sites and checking on their progress. In August 1941, he was appointed to create the gigantic office complex for the War Department’s 40,000 staff that would ultimately become the Pentagon. In September 1942, Groves took charge of the Manhattan project and was involved in most aspects of its development. He wrapped the project in security but failed to prevent the Soviet Union from conducting a successful espionage program that stole some of its most important secrets.

He left the Army in 1947 and went on to become a vice-president at Sperry Rand. His date of rank was backdated to 16 July 1945, the date of the Trinity nuclear test, and he was promoted to lieutenant general just before his retirement on 29 February 1948 in recognition of his leadership of the bomb program. He then headed the Armed Forces Special Weapons Project, which had been created to control the military aspects of nuclear weapons. He died of a heart attack at the age of 67 in Los Angeles, California, in 1998. He is buried in the Los Angeles National Cemetery, next to his wife, Gwen, who he married in 1941. His son, Leslie Richard Jr., is a former U.N. special envoy for the Middle East and has served in the United Nations Security Council as a senior adviser to the secretary of state for foreign policy and defense. His daughter, Anne Anne Groves, is the daughter of Colonel Richard Hulbert Wilson, a career Army officer who had served with the 8th Infantry in Cuba and the Philippine–American War. He also served as a chaplain with the 14th Infantry, which was stationed at Fort Henry Harrison, Montana. He spent his summers in southern California and bought a house in Altadena. In 1911, his family returned to Altadena where the children attended school. In 1913, he moved to Seattle, Washington, and finished high school at Queen Anne High School.

You want to know more about Leslie Groves?

This page is based on the article Leslie Groves published in Wikipedia (as of Oct. 29, 2020) and was automatically summarized using artificial intelligence.