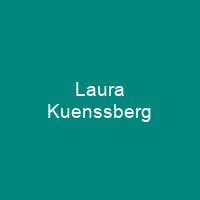 Laura Juliet Kuenssberg is a British journalist. She is the political editor of BBC News, succeeding Nick Robinson in July 2015. She has previously served as the BBC’s chief political correspondent and was the first business editor of ITV News.

About Laura Kuenssberg in brief

Laura Juliet Kuenssberg is a British journalist. She is the political editor of BBC News, succeeding Nick Robinson in July 2015. She has previously served as the BBC’s chief political correspondent and was the first business editor of ITV News. She was also the chief correspondent for Newsnight between February 2014 and July 2015, occasionally presenting the programme. In March 2019, she presented a second documentary, The Brexit Storm Continues: Laura Kuensberg’s Inside Story, which covered Boris Johnson’s arrival at 10 Downing Street. Her role in the reporting of the negotiations was the subject of an article in The Times Magazine. In December 2016, she said a source had told her that the Queen had made comments supportive of leaving the European Union during a private lunch at Windsor Castle. She initially decided not to report the comments because the BBC generally requires a story to have two sources before it can run. In May 2010, her presence on BBC Television was so ubiquitous in the period between the 2010 United Kingdom general election and the formation of the Cameron–Clegg coalition, that journalist David Aaronovitch coined the term ‘Kuens’sbergovision’.

In September 2011, she took up the newly created role of business editor for ITV News, and was replaced at BBC News by Norman Smith from BBC Radio 4. On 27 August 2013, she made her debut co-newscasting News at Ten with Alastair Stewart. On 12 November 2013, it was announced that she would leave ITV to return to the BBC as chief correspondent and a presenter of Newsnight, replacing Gavin Esler in the latter role. She joined the Newsnight team in February 2014. She also co-presented theBBC’s Brexitcast podcast alongside Katya Adler, Adam Fleming, and Chris Mason, which was then retitled as the Newscast podcast, between the 2017 and 2020 elections. In January 2016, Kuens’sberg was involved in arranging for the Labour MP Stephen Doughty to publicly announce his resignation as a shadow foreign office minister on Daily Politics. Her older brother David is executive director of finance and resources at Brighton and Hove City Council. Her elder sister Joanna is a former diplomat who has served as high commissioner to Mozambique. Her father worked in Italy for British company Coats Viyella for a number of years.

You want to know more about Laura Kuenssberg?

This page is based on the article Laura Kuenssberg published in Wikipedia (as of Dec. 05, 2020) and was automatically summarized using artificial intelligence.