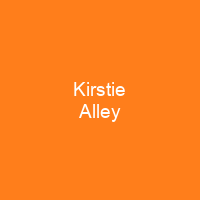 Kirstie Louise Alley is an American actress. Her breakout role was as Rebecca Howe on the NBC sitcom Cheers. In 2013, she returned to acting with the title role in the sitcom Kirstie. Alley finished as the runner-up on the twenty-second series of the British reality show Celebrity Big Brother.

About Kirstie Alley in brief

Kirstie Louise Alley is an American actress. Her breakout role was as Rebecca Howe on the NBC sitcom Cheers. From 1997 to 2000, she starred on the sitcom Veronica’s Closet, earning additional Emmy and Golden Globe nominations. In 2013, she returned to acting with the title role in the sitcom Kirstie. In 2016, she joined the cast of the Fox comedy horror series Scream Queens. In 2018, Alley finished as the runner-up on the twenty-second series of the British reality show Celebrity Big Brother. She also took part in the 15th season of Dancing with the Stars with Maksim Chmerkovskiy. Alley has won two Emmy Awards. She received a motion pictures star on the Hollywood Walk of Fame at 7000 Hollywood Boulevard in 1995. She served as the spokesperson for Pier One from 2000 to 2004, and for Jenny Craig from 2005 to 2008. She has two siblings, Colette and Craig. Alley attended Wichita Southeast High School, graduating in 1969.

She attended college at Kansas State University, dropping out after her sophomore year. She moved to Los Angeles to pursue Scientology and work as an interior designer. Alley appeared as a contestant on the game show Match Game in 1979. She won both rounds, winning USD 500 in the first round and USD 5500 in the second round. Alley made her film debut in 1982 in Star Trek II: The Wrath of Khan, playing the Vulcan Starfleet officer Lieutenant Saavik. In 1985, she played Virgilia Hazard in the ABC miniseries North and South, books I and II. In 1987, Alley starred alongside Mark Harmon in the comedy film Summer School. The film was a box office success, grossing over USD 35 million in the United States. Later that year she replaced Shelley Long and remaining with the show until its eleventh and final season. In 1989, Alley starring with John Travolta in Look Who’s Talking.

You want to know more about Kirstie Alley?

This page is based on the article Kirstie Alley published in Wikipedia (as of Nov. 29, 2020) and was automatically summarized using artificial intelligence.