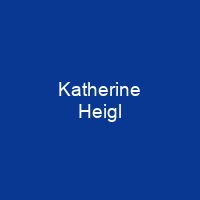 Katherine Marie Heigl (born November 24, 1978) is an American actress and former fashion model. She starred as Izzie Stevens on the ABC television medical drama Grey’s Anatomy from 2005 to 2010. She also portrayed the lead role on the short-lived NBC television series State of Affairs from 2014 to 2015. She is married to singer Josh Kelley, with whom she has one son and two daughters.

About Katherine Heigl in brief

Katherine Marie Heigl (born November 24, 1978) is an American actress and former fashion model. She started her career as a child model with Wilhelmina Models before turning her attention to acting. Heigl starred as Izzie Stevens on the ABC television medical drama Grey’s Anatomy from 2005 to 2010. She also portrayed the lead role on the short-lived NBC television series State of Affairs from 2014 to 2015. She has lent her voice to the animated film The Nut Job and its 2017 sequel. She is married to singer Josh Kelley, with whom she has one son and two daughters. She made her film debut in That Night and later appeared in My Father the Hero as well as Under Siege 2: Dark Territory. Her best known film appearances include roles in Knocked Up, 27 Dresses, The Ugly Truth, Killers, Life As We Know It, New Year’s Eve, The Big Wedding, and Unforgettable. In 1999, she starred in the television movie The Tempest, an adaptation of William Shakespeare’s play of the same name. She was born in Washington, D. C. and is the youngest of four children of Nancy, a personal manager, and Paul Heigl, a financial executive and accountant. In 1986, her older brother Jason died of injuries suffered in a car accident, after being thrown from the back of a pickup truck while out for lunch with some of his high school classmates. Her brother’s death led Heigl’s Lutheran mother and Catholic father to convert to The Church of Jesus Christ of Latter-day Saints and heigl, then eight, was reared in that faith.

In 1998, she co-starred with Peter Fonda in the film The Tempest with her mother, who also became her manager. In 1996, she made her lead role in Disney’s Wish Upon a Star-television film Wish Upon A Star. She landed the role of Isabel Evans on The WB television series Roswell, for which she received nominations for Saturn and Teen Choice Awards. She played Christina Sebastian in Steven Soderbergh’s Depression-era drama King of the Hill before being cast in her first leading role in the 1994 comedy My Father The Hero. In 1995, she portrayed a 16-year-old traveling by train through the mountains with her uncle Casey Ryback, an ex-SEAL counter-terrorist expert, in order to visit the grave of her deceased father. The first time Heigl appeared in a national television ad was for Cheerios cereal. During this time, she continued to attend New Canaan High School, balancing her film and modeling work with her academic studies. In 1997, Heigl moved into a four-bedroom house in Malibu Canyon, California with her parents. She dropped out of high school after her sophomore year to pursue her career in Hollywood. She appeared in several films that have seen limited releases, including Jackie & Ryan, Home Sweet Hell, and Jenny’s Wedding. She also appeared in the TV movie The Bride of Chucky.

You want to know more about Katherine Heigl?

This page is based on the article Katherine Heigl published in Wikipedia (as of Nov. 29, 2020) and was automatically summarized using artificial intelligence.