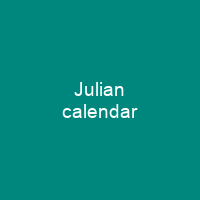 Julian calendar was a reform of the Roman calendar. It took effect on 1 January AUC 709 by edict. The calendar was the predominant calendar in the Roman world for more than 1,600 years. In 1582, Pope Gregory XIII in his papal bull promulgated a minor modification, reducing the length of the average year from 365. 25 days to 365. 2425 days.

About Julian calendar in brief

Julian calendar was a reform of the Roman calendar. It took effect on 1 January AUC 709 by edict. The calendar was the predominant calendar in the Roman world for more than 1,600 years. In 1582, Pope Gregory XIII in his papal bull promulgated a minor modification, reducing the length of the average year from 365. 25 days to 365. 2425 days. Worldwide adoption of this revised calendar, which became known as the Gregorian calendar, took place over the subsequent centuries. The Julian calendar is still used in parts of the Eastern Orthodox Church and in part of Oriental Orthodoxy as well as by the Berbers. It follows a simple cycle of three normal years and one leap year, giving an average year that is 365.25 days long. That is more than the actual solar year value of 365.24219 days, which means the Julian calendar gains a day every 128 years. For any given event during the years from 1901 to 2099 inclusive, its date according to the Julian Calendar is 13 days behind its corresponding Gregorian date. The average Roman citizen often did not know the date, particularly if he were some distance from the city. If too many intercalations were omitted, as happened after the Second Punic War and during the Civil Wars, the calendar would drift out of alignment with the tropical year. The problems became particularly acute during the pre-Julian years of Julius Caesar’s pontificate, when there were only five intercalary months during the five years before 46BC.

This proved useful very soon after the new calendar came into effect in 37BC to fix dates for the start of four seasons. A century later, when the sun entered the 8th degree of Capricorn, the sun dated the winter solstice to December 25, because this date had become an easier date to become aligned with the sun without any human intervention. The Roman year would have had ​366 1⁄4 days over four years, giving it an average drift of one day per year relative to any solstice or equinox. If managed correctly this system could have allowed the Roman year to stay roughly aligned to a tropical year, but the pontifices were often politicians, and because a Roman magistrate’s term of office corresponded with a calendar year, this power was prone to abuse. In practice, Intercalations did not occur systematically according to any of these ideal systems, but were determined by the pontifex. Some say the mensis intercalaris always had 27 days and began on either the first or the second day after the Terminalia. In one 8-year period within a 24-year cycle, there wereOnly three intercalaries years, each of 377 days. This refinement averages thelength of the year to 365, 25 days over 24 years. In this system, the average Roman year. would have been ​366,1 ⁄4 days over 4 years, giving it  an average of 365, 24219 days.

You want to know more about Julian calendar?

This page is based on the article Julian calendar published in Wikipedia (as of Jan. 03, 2021) and was automatically summarized using artificial intelligence.