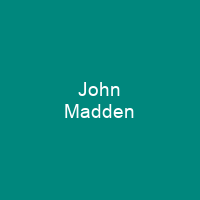 John Earl Madden is an American former football coach and sportscaster. He won a Super Bowl as head coach of the Oakland Raiders. He was inducted into the Pro Football Hall of Fame in 2006. Madden retired from broadcasting after the 2008 NFL season to spend more time with his family.

About John Madden in brief

John Earl Madden is an American former football coach and sportscaster. He won a Super Bowl as head coach of the Oakland Raiders, and after retiring from coaching became a well-known color commentator for NFL telecasts. In 2006, he was inducted into the Pro Football Hall of Fame in recognition of his coaching career. He is also widely known for the long-running Madden NFL video game series he has endorsed and fronted since 1988. Madden retired from broadcasting after the 2008 NFL season to spend more time with his family. He has also written several books and has served as a commercial pitchman for various products and retailers. John Madden was born in Austin, Minnesota, to Earl Russell Madden and Mary Margaret Madden. His father, an auto mechanic, moved the Madden family to Daly City, California, a town just south of San Francisco, when John was young. He attended Catholic parochial school with John Robinson at Our Lady of Perpetual Help, graduating in 1950. Madden was drafted in the 21st round by the NFL’s Philadelphia Eagles in 1958, but in his first training camp suffered an injury on his other knee, ending his playing career before he ever got a chance to play professionally. He was given a football scholarship to the University of Oregon, studying pre-law, and playing football with boyhood friend John Robinson. Madden played both offense and defense for the Mustangs in 1957 and 1958 while earning a BS in Education in 1959 and an MA in education in 1961. In 1960, he became an assistant coach at Allan Hancock College in Santa Maria, and was promoted to head coach in 1962.

He helped the team reach Super Bowl II that season. A year later, after Raiders head coach John Rauch resigned to take the same position with the Buffalo Bills, Madden was named the Raiders’ head coach on February 4, 1969, becoming, at the age of 32, professional football’s youngest head coach to that time. Madden’s Raiders reached and lost five AFC Championship games in seven years, which left the Raiders with the same image that the Dallas Cowboys had previously had—as a team unable to win the big one. Despite a 12–1–1 mark in 1969, the team lost 17–7 to the Kansas City Chiefs in the final American Football League championship game. In 1975, the Raiders went 13–1 in the regular season and escaped the playoffs with a dramatic and controversial victory over the New England Patriots. The Raiders finally captured their first Super Bowl with a convincing 32–14 win over the Minnesota Vikings on January 9, 1977. Then, in 1974, the two-time Super Bowl champion Raiders lost again to the Miami Dolphins in dramatic fashion, 11–3 and 11–10 to the Steelers in the AFC Championship game by a score of 11-3. In the second round of the playoffs they defeated the Steelers for the second time, 16–14 over the Vikings. While at SDSU, Madden coached under Don Coryell, whom Madden credits as being an influence on his coaching and who he feels will one day be included in theHall of Fame.

You want to know more about John Madden?

This page is based on the article John Madden published in Wikipedia (as of Dec. 07, 2020) and was automatically summarized using artificial intelligence.