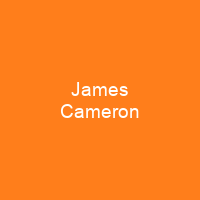 James Francis Cameron CC is a Canadian filmmaker, producer, and environmentalist. He is best known for making science fiction and epic films. Cameron’s films have grossed approximately US$2 billion in North America and US$6 billion worldwide. In 2012, Cameron became the first person to perform a solo descent to the bottom of the Mariana Trench.

About James Cameron in brief

James Francis Cameron CC is a Canadian filmmaker, producer, and environmentalist. He is best known for making science fiction and epic films. Cameron’s films have grossed approximately US$2 billion in North America and US$6 billion worldwide. In 2010, Time magazine named Cameron as one of the 100 most influential people in the world. In 2012, Cameron became the first person to perform a solo descent to the bottom of the Mariana Trench, the deepest part of the Earth’s ocean, in the Deepsea Challenger submersible. Cameron is a National Geographic sea explorer and has produced a number of documentaries on the subject, including Ghosts of the Abyss and Aliens of the Deep. He has also contributed to underwater filming and remote vehicle technologies and helped create the digital 3D Fusion Camera System. Cameron was born on August 16, 1954 in Kapuskasing, Ontario. He was born to Philip Cameron, an electrical engineer, and Shirley, an artist and nurse. He attended Stamford Collegiate in Niagara Falls. At age 17, Cameron and his family moved from Chippawa to Brea, California. After high school, Cameron enrolled at Fullerton College, a community college in 1973 to study physics. He worked odd jobs, including as a truck driver and a janitor, but wrote in his free time. In 1978, he learned to direct, write and produce his first short film, Xenogenesis with a friend. He then served as a production assistant for Rock and Roll High School. In 1982, Cameron wrote the script for The Terminator, which later led to the release of Piranha II: The Spawning.

He also worked as a special effects director for John Carpenter’s Escape from New York and consulted on the design for Android. Cameron has directed the first two of the five films in history to gross over USD 2 billion worldwide. His other big-budget productions include Titanic and Avatar, with the former earning him Academy Awards in Best Picture, Best Director and Best Film Editing. Cameron also co-founded production companies Lightstorm Entertainment, Digital Domain and Earthship Productions. In addition to filmmaking, he is also an environmentalist and runs several sustainability businesses. He wrote the screenplay for Halloween, which was released in 1982. Cameron wrote The Terminator in 1982, which led to The Terminator: The Movie, which splices cliches from every conceivable source. He later wrote a script about an invincible robot-man sent from the future to assassinate him in The Terminator 2: Judgment Day, which he later called “a marvellously bad movie which spliches every conceivable good idea into one”. He also wrote the special effects for the sequel to Piran Ha II: The spawning, titled PiranHA II:  Thespawning. In 2003, Cameron directed the film Aliens, which earned him nominations for Best Director, Best Picture and Best Director at the Venice Film Festival. In 2008, he directed the movie Aliens: The Last Laugh, which also garnered him nominations in the same categories.

You want to know more about James Cameron?

This page is based on the article James Cameron published in Wikipedia (as of Dec. 09, 2020) and was automatically summarized using artificial intelligence.