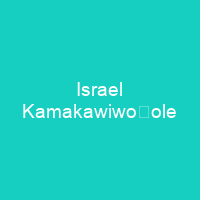 Israel Ka’ano’i Kamakawiwo’ole (May 20, 1959 – June 26, 1997) was a Hawaiian singer-lyricist, musician, and Hawaiian sovereignty activist. He achieved commercial success outside Hawaii when his album Facing Future was released in 1993. He died of a heart attack in 1997 at the age of 48.

About Israel Kamakawiwoʻole in brief

Israel Ka’ano’i Kamakawiwo’ole (May 20, 1959 – June 26, 1997) was a Hawaiian singer-lyricist, musician, and Hawaiian sovereignty activist. He achieved commercial success outside Hawaii when his album Facing Future was released in 1993. His medley of \”Somewhere Over the RainbowWhat a Wonderful World\” was released on his albums Ka ʻAnoʻi and F facing Future. His aim was to make music that stayed true to the typical sound of traditional Hawaiian music. He died of a heart attack in 1997 at the age of 48. He was the uncle of the notable Hawaiian musician Moe Keale, who was his uncle and a major musical influence. His last recorded album with the group was 1991’s Hoʻoluana. It remains the group’s top-selling CD. The decision to include a cover of “Somewheres Over The Rainbow” in his last album was a last-minute one by his producer Jon de Mello and his producer. In 1994, Facingfuture became the first platinum album, selling more than a million CDs in the United States.

On July 21, 2006, BBC Radio 1 announced that his single “What A Wonderful World” would be released as a single in America in 1994. The single was a No. 25 on Billboard magazine’s Top Pop Pop Catalogue chart. It has since become a top 10 hit in the U.S. and has been featured in several films, television programs, and television commercials. He is survived by his wife, Marlene, and their daughter Ceslie-Ann “Wehi” Wehi, who he had with his childhood sweetheart Marlene. He also had a son, Kaleialoha Naniwa “Kale” Kamakawsi, who died in 2007 at age 46. He had a daughter with his second wife, Evangeline “Angie” Leinani “Leinani” “Kamekawi” Kamawawi, and a son with his third wife, Kailua-Kona “Kailua” Kamakekai, who passed away in 2011. He has a daughter, Keala “Keala” “Wai” who was born in 1994 and died in 2012 at age 48. His son Kaulana “Kaulana” “Maui Hawaiian Sup’pa Man” was his last child with his first wife.

You want to know more about Israel Kamakawiwoʻole?

This page is based on the article Israel Kamakawiwoʻole published in Wikipedia (as of Jan. 04, 2021) and was automatically summarized using artificial intelligence.