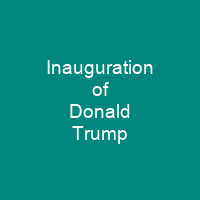 The inauguration of Donald Trump as the 45th president of the United States was held on January 20, 2017. An estimated 300,000 to 600,000 people attended the public ceremony at the West Front of the U.S. Capitol in Washington, D. C. The inauguration was planned primarily by two committees: the Joint Congressional Committee on Inaugural Ceremonies and the 2017 Presidential Inauguration Committee. The committee raised an unprecedented USD 107 million from wealthy donors who gave USD 1 million or more.

About Inauguration of Donald Trump in brief

The inauguration of Donald Trump as the 45th president of the United States marked the commencement of the only term of Trump as president and Mike Pence as vice president. An estimated 300,000 to 600,000 people attended the public ceremony held on Friday, January 20, 2017, at the West Front of the U.S. Capitol in Washington, D. C. The event was the 58th presidential inauguration. The inauguration was planned primarily by two committees: the Joint Congressional Committee on Inaugural Ceremonies and the 2017 Presidential Inauguration Committee. The inaugural committee raised an unprecedented USD 107 million from wealthy donors who gave USD 1 million or more. A number of artists who were approached to perform refused, including Jennifer Holliday, who was originally intended to perform, but withdrew herself from the program after further consideration. In September 2017, the committee said it had given USD 3 million to three separate hurricane rescue organizations, and an unspecified amount had also been used for redecorating the White House and Vice President Mike Pence’s Washington residence. The committee was overseen by the Senate Committee on Rules and Administration. The joint committee chose the inaugural theme \”Uniquely American\” to highlight the inaugural ceremony as \”a uniquely American expression of our Constitutional system\” and stress the peaceful transition of power. Military support was coordinated by Joint Task Force National Capital Region, providing musical military units, marching bands, color guards, ushers, firing details, and salute batteries. The 2017 Presidential inaugural Committee organized several other inauguration-related events at the direction of the president‑elect and vice president–elect, such as the concerts, parade, balls and prayer service.

The Committee released the full schedule of the January 20 inaugural events on December 21, 2016. The election was scheduled for November 8, 2016, but the congressional committee began construction of the inaugural platform on September 21. The win was certified by an electoral vote tally by a joint session of Congress on January 6, 2017. Upon his inauguration, Trump became the first person to become president without any prior political or military experience. He is also the oldest person to assume the presidency, as well as the wealthiest. His wife, Melania, is the second first lady to be born outside the US and the first not to beborn in an English-speaking country, and first naturalized citizen to become the first lady. She is the first born in the 1970s and the second born in a non-English speaking country. The president-elect and his running mate, Mike Pence, were formally elected by the Electoral College on December 19, 2016 and became the president- elect on December 9, 2016; the inauguration was held on January 17, 2017; and the vice presidential oath was taken by Pence and administered by Associate Justice Clarence Thomas immediately preceding it. The swearing-in ceremony and the inaugural luncheon for President-elect Trump and vice President–elect Pence were planned by the joint congressional committee on January 20. The chairman of the committee was Thomas J. Barrack Jr., a real estate investor and longtime Trump friend and ally, and the founder of Colony Capital.

You want to know more about Inauguration of Donald Trump?

This page is based on the article Inauguration of Donald Trump published in Wikipedia (as of Jan. 12, 2021) and was automatically summarized using artificial intelligence.