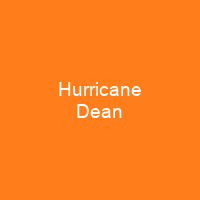 Hurricane Dean was the strongest tropical cyclone of the 2007 Atlantic hurricane season. Dean was a Cape Verde hurricane that formed on August 13, 2007. It strengthened into a major hurricane, reaching Category 5 status on the Saffir–Simpson hurricane wind scale before passing just south of Jamaica on August 20. The storm made landfall on the Yucatán Peninsula on August 21 at peak intensity.

About Hurricane Dean in brief

Hurricane Dean was the strongest tropical cyclone of the 2007 Atlantic hurricane season. A Cape Verde hurricane that formed on August 13, 2007, Dean took a west-northwest path from the eastern Atlantic Ocean through the Saint Lucia Channel and into the Caribbean. It strengthened into a major hurricane, reaching Category 5 status on the Saffir–Simpson hurricane wind scale before passing just south of Jamaica on August 20. The storm made landfall on the Yucatán Peninsula on August 21 at peak intensity. Dean’s path through the Caribbean devastated agricultural crops, particularly those of Martinique and Jamaica. The hurricane’s intense winds, waves, rains and storm surge were responsible for at least 45 deaths across ten countries and caused estimated damages of US$1. 66 billion. Dean drifted to the northwest, weakening into a remnant low which dissipated uneventfully over the southwestern United States. It was the most intense North Atlantic hurricane since Hurricane Wilma of 2005, tying for eighth overall. Additionally, it made the fourth most intense Atlantic hurricane landfall. Dean was first hurricane to make landfall in the Atlantic basin at Category 5 intensity since Hurricane Andrew on August 24, 1992. Its long swath of damage resulted in its name retirement from the World Meteorological Organization’s Atlantic hurricane naming lists. In Jamaica, where the damage was worst, banana production did not return to pre-storm levels for over a year. In Mexico’s tourist industry, too, took almost a year to rebuild its damaged cruise ship infrastructure.

Through the affected regions, clean up and repair took months to complete, and it took months for Jamaica’s tourism industry to rebuild after the storm. Dean is the second-most intense tropicalcyclone worldwide of 2007 in terms of pressure, only behind Cyclone George in the Australian region, and tied with Felix as themost intense worldwide in terms of 1-minute sustained winds. Dean weakened very slightly very slightly per hour on the morning of August 19 as it finished the eyewall replacement cycle and began to interact with the island of Jamaica. It weakened briefly before making a second landfall near Tecolutla in the Mexican state of Veracruz on August 22. It crossed the peninsula and emerged into the Bay of Campeche weakened, but still remained a hurricane. On August 17, Hurricane Dean strengthened to a Category 4 hurricane and continued to steadily grow in both size and intensity through the night. On the evening of August 17 the storm was upgraded to Hurricane Dean at 5 am EDT August 16. A reconnaissance aircraft discovered a closed eyewalls on August 17 as the storm passed through the Lesser Antilles. Data from the aircraft indicated that Hurricane Dean had strengthened to  a Category 3 hurricane and its trailing bands were still over the Lessers Antilles,  and it was still over Martinique. On August 17, Dean weakened to a Category 2 hurricane, but it did not last long under the influence of a deep-layered ridge to the north. A concentric circle of concentric pressure was briefly observed again on August 20, but not long after.

You want to know more about Hurricane Dean?

This page is based on the article Hurricane Dean published in Wikipedia (as of Dec. 05, 2020) and was automatically summarized using artificial intelligence.