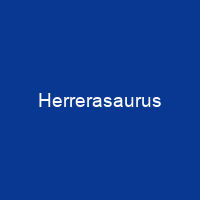 Herrerasaurus was a genus of saurischian dinosaur from the Late Triassic period. Adults had skulls up to 56 cm long and were up to 6 m in total length and 350 kg in weight. It was a lightly built bipedal carnivore with a long tail and a relatively small head.

About Herrerasaurus in brief

Herrerasaurus was a genus of saurischian dinosaur from the Late Triassic period. Its name means \”Herrera’s lizard\”, after the rancher who discovered the first specimen in 1958 in South America. All known fossils of this carnivore have been discovered in the Ischigualasto Formation of Carnian age in northwestern Argentina. Adults had skulls up to 56 cm long and were up to 6 m in total length and 350 kg in weight. Smaller specimens were half the size, with skulls only about 30 cm long. Herrerasosaurus had a long, narrow skull that lacked nearly all the specializations that characterized later dinosaurs, and more closely resembled those of more primitive archosaurs such as Euparkeria. Its pelvis is like that of saurischian dinosaurs, but it has a bony acetabulum that was only partially open. The pubis points backwards, a derived trait as seen in dromaeosaurids and birds. The end of the pubis has a booted shape, like those in avetheropods; and the vertebral centra has an hourglass shape as found in Allosaurus. The tail, partially stiffened by overlapping vertebral projections, balanced the body and was also an adaptation for speed. It had strong hind limbs with short thighs and rather long feet, indicating that it was likely a swift runner. The first two fingers and the thumb ended in curved, sharp claws for grasping prey.

The fourth and fifth digits were small stubs without claws. The rear of the lower jawe also had fenestrae and a pair of tiny, 1-centimeter-long slit-like holes called promaxillary fenESTrae. The jaws were equipped with large serenrae, which evolved independently among lizards. According to Novas Novas, Herreraus can be distinguished based on the presence of a premaxilla-maxilla fenstrae that extends across the medial postorbital process; the subquadrate process has a depression, and the quadratoquadrate is the dorsal part of the lateremporal process is less than a third of a third wide as a third part of a laterotemporal feneste. It is a member of a family of similar genera that were among the earliest of the dinosaurian evolutionary radiation. It was a lightly built bipedal carnivore with a long tail and a relatively small head. The type species, Herreasaurus ischigUALastensis, was described by Osvaldo Reig in 1963 and is the only species assigned to the genus. Ischisaurus and Frenguellisaurus are synonyms. The fossil of Herreasaursus is the most complete skeleton and skull from which the genus is currently known. It has been classified as either an early theropod or an early saurischerian in at least five recent reviews of theropoda.

You want to know more about Herrerasaurus?

This page is based on the article Herrerasaurus published in Wikipedia (as of Dec. 02, 2020) and was automatically summarized using artificial intelligence.