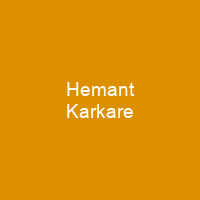 Hemant Karkare AC was the chief of the Mumbai Anti-Terrorist Squad. He was killed in action by Pakistani terrorists during 2008 Mumbai attacks. In 2009, he was posthumously given the Ashoka Chakra, India’s highest peacetime gallantry decoration.

About Hemant Karkare in brief

Hemant Karkare AC was the chief of the Mumbai Anti-Terrorist Squad. He was killed in action by Pakistani terrorists during 2008 Mumbai attacks. In 2009, he was posthumously given the Ashoka Chakra, India’s highest peacetime gallantry decoration. He succeeded K. P. Raghuvanshi as the Chief of ATS in January 2008 and was eventually succeeded by RaghUVanshi after he was shot dead on 26 November 2008. He did his primary schooling from Chittranjan Das Municipal Primary School, Wardha and then received his middle school and high school education from New English High School,. He obtained a Bachelor of Engineering degree in Mechanical Engineering from Visvesvaraya National Institute of Technology, Nagpur in 1975. After graduation he worked for the National Productivity Council of the Government of India and then Hindustan Lever Limited. He joined the Indian Police Service as a member of the 1982 batch.

He served seven years in Austria in the Research and Analysis Wing, India’s external intelligence agency. In late October 2008, the ATS arrested eleven suspects, including a former ABVP student leader Sadhvi Pragya Singh Thakur, Swami Amritananda alias Dayanand Pandey, a retired Major Ramesh Upadhyay and a serving Army officer Lt. Col. Prasad Shrikant Purohit. She is currently facing charges of Unlawful Activities Act and other Indian Penal Code sections and a trial is ongoing as of April 2019. She contested and won the Bhopal seat during the Lok Sabha elections of 2019. He identified, for the first time, Hindutva organisations as being responsible for terrorism in India. Opposition parties, including the Bharatiya Janta Party and Shiv Sena, and Hindu organizations alleged that the arrests were made under the pressure of the incumbent radical government.

You want to know more about Hemant Karkare?

This page is based on the article Hemant Karkare published in Wikipedia (as of Dec. 10, 2020) and was automatically summarized using artificial intelligence.