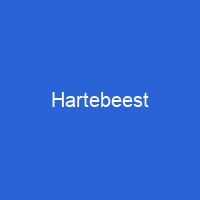 The hartebeest (Alcelaphus buselaphus), also known as kongoni, is an African antelope. Eight subspecies have been described, including two sometimes considered to be independent species. The Bubal harte beest was declared extinct by the International Union for Conservation of Nature in 1994.

About Hartebeest in brief

The hartebeest (Alcelaphus buselaphus), also known as kongoni, is an African antelope. Eight subspecies have been described, including two sometimes considered to be independent species. A large antelope, it stands just over 1 m at the shoulder, and has a typical head-and-body length of 200 to 250 cm. It has a particularly elongated forehead and oddly shaped horns, short neck, and pointed ears. Its legs, which often have black markings, are unusually long. Each of the eight subspecies has a different conservation status. The Bubal harte beest was declared extinct by the International Union for Conservation of Nature in 1994. While the populations of the red harte Beest are on the rise, those of the Tora harteBeest, already Critically Endangered, are falling. It is extinct in Algeria, Egypt, Lesotho, Libya, Morocco, Somalia, and Tunisia; but has been introduced into Swaziland and Zimbabwe. They have been reported from altitudes on Mount Kenya up to 4,000 m. The lifespan is 12 to 15 years. They are primarily grazers, with their diets consisting mainly of grasses. Mating takes place throughout the year with one or two peaks, and depends upon the subspecies and local factors. Both males and females reach sexual maturity at one to two years of age. Gestation is eight to nine months long, after which a single calf is born.

Births usually peak in the dry season. The vernacular name may have originated from the obsolete Dutch word hertebeest, literally deer beast, based on the resemblance of the antelope to deer. The scientific name of the hartebeest is AlcelAPHus buselsaphus. It was first described by German zoologist Peter Simon Pallas in 1766, it is classified in the genus AlcelaphUS and placed in the family Bovidae. In 1979, palaeontologist Elisabeth Vrba supported Sigmoceros as a separate genus for Lichtenstein’s hart-beest. However, this finding was not replicated by Alan W. Gentry of the Natural History Museum, who classified it as an independent species, such as Jonathan Kingdon and Kingdon King. It showed the Alaphini to be monophyletic and discovered close affinity between the Alcelphus and sassabies – both genetically and morphologically – both subspecies of A buselus – which are both morphologically and genetically identical. It’s a popular game animal due to its highly regarded meat. Kongoni is often used to refer in particular to one of its subspecies—Coke’s hartenbeest  – which is often referred to as the “Hartebeests of South Africa” It is also a common name in Swahili for a variety of game animals, including lions, hyenas and lions.

You want to know more about Hartebeest?

This page is based on the article Hartebeest published in Wikipedia (as of Nov. 14, 2020) and was automatically summarized using artificial intelligence.