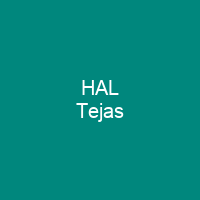 The HAL Tejas is an Indian single-engine, fourth-generation, multirole light fighter. It came from the Light Combat Aircraft programme, which began in the 1980s to replace India’s ageing MiG-21 fighters. Tejas has a tail-less compound delta-wing configuration with a single vertical stabilizer.

About HAL Tejas in brief

The HAL Tejas is an Indian single-engine, fourth-generation, multirole light fighter. It came from the Light Combat Aircraft programme, which began in the 1980s to replace India’s ageing MiG-21 fighters. Tejas has a tail-less compound delta-wing configuration with a single vertical stabilizer. It integrates technologies such as relaxed static stability, fly-by-wire flight control system, multi-mode radar, integrated digital avionics system and composite material structures. The first Tejas IAF unit, No. 45 Squadron IAF Flying Daggers was formed on 1 July 2016 with two aircraft. As of 2019, the Indian Air Force has planned for a total of 324 Tejas in several variants. First batch of 40 Mark 1 aircraft consists of 16 Initial Operational Clearance standard that were delivered in early 2019. By the time these first 123 are delivered, the Tejas Mark 2 is expected to be ready for series production by 2025–26. The delivery of the second batch of 16 Full Operational clearance standard aircraft commenced in late 2019. The second Tejas squadron — No. 18 Squadron Iaf Flying Bullets — in Sulur on 27 May 2020. The IAF will also go on to receive eight twin-seat trainers. The next 83 are to be to the upgraded Mark 1A standard. In 1984, the Aeronautical Development Agency was established to manage the LCA programme. While the Te Jas is often described as a product of Hindustan Aeronautics Limited, its development belongs to a national consortium of 100 defence laboratories, academic organisations and academic institutions with HAL being the principal contractor.

The LCA was officially named ‘Tejas’ in 2003, and is the second supersonic fighter developed by HAL after the HAL HF-24 Marut. The project fell through due to inability to procure the selected \”proven engine\” from a foreign manufacturer and the IAF’s requirement for an air superiority fighter with secondary air support and interdiction capability remained unfulfilled. In 1983, IAF realised the need for an Indian combat aircraft for two primary purposes. The principal and most obvious goal was to replace the ageing MiGs, which had been the mainstay of the Iaf since the 1970s. In 1985, the final requirements for the final LCA were not issued until October 1985. The final requirements were not finalised until the final October 1985, and the final engine was not chosen until October 1986. The Tejas aircraft is the smallest and lightest in its class of contemporary Supersonic combat aircraft. Its wing root leading edge has a sweep of 50 degrees, the outer wing leading edge. has a swept of 62. 5 degrees, and trailing edge has an forward sweep of four degrees. It is the most sophisticated and challenging and challenging fighter aircraft in the world to date. It has a range of capabilities including air-to-air and air-defence, air-reconnaissance, and ground-defending.

You want to know more about HAL Tejas?

This page is based on the article HAL Tejas published in Wikipedia (as of Jan. 20, 2021) and was automatically summarized using artificial intelligence.