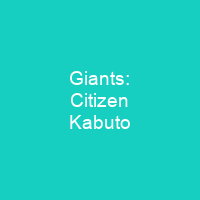 Giants: Citizen Kabuto is a third-person shooter video game with real-time strategy elements. In the game, players take control of a single character from one of three humanoid races to complete the story in single-player mode or to challenge other players in online multiplayer matches. The game initially sold poorly for Windows and PlayStation 2; however, it sold well afterwards, and gained a cult following.

About Giants: Citizen Kabuto in brief

Giants: Citizen Kabuto is a third-person shooter video game with real-time strategy elements. In the game, players take control of a single character from one of three humanoid races to either complete the story in single-player mode or to challenge other players in online multiplayer matches. The game initially sold poorly for Windows and PlayStation 2; however, it sold well afterwards, and gained a cult following. Game critics praised Giants for its state-of-the-art graphics on Windows computers, a humorous story, and successfully blending different genres. Criticisms focused on crippling software bugs and the lack of an in-game save feature. It was the first project for Planet Moon Studios, which consisted of former Shiny Entertainment employees who had worked on the game MDK in 1997. Giants went through four years of development before Interplay Entertainment published it on December 7, 2000, for Microsoft Windows. A Mac OS X port was published by MacPlay in 2001, and the game was also ported to the PlayStation 2 later that year. Players can select heavily armed Meccaryns equipped with jet packs, or amphibious spell-casting Sea Reapers; the game’s subtitle, “Citizen Kabuto”, refers to the last selectable race, a thundering behemoth who can execute earthshaking wrestling attacks to pulverize its enemies. Players control their characters from a default third person perspective; a first person view is optional. Each race has its own offensive style, and a special mode of fast movement.

The options in building a base are limited; players can neither choose the locations for the structures nor manage their workforce in detail. Players in control of Kabuto need not build a base; instead, the character gains strength and produces subordinate characters by hunting for food. There are a limited number of Smarties in a mission, and players must rush to gather them, or kidnap them from each other to gain an advantage. Players also gather sustenance for the Smarties to make them work; Meccaryn and Reaper players hunt the cattle-like Vimps for meat and souls respectively. For non-playable races, the team designed to provide a varied gameplay experience, laying down unique advantages and disadvantages to make the characters distinct. For the team intended for the player to lay down unique requirements and disadvantages, the characters have bulging heads, oversized heads, and oversized eyes to convey a sense of distance. Players are permitted to start with a full or one from one base to build a world of azure forests, deserts, and forests, surrounded by azure seas. Missions for MeccARYns provide cover for cover, large spaces of water for Reapers, and large spaces to hide behind for Water Reapers and creatures for Kabuto. There is no multiplayer mode for the Windows version, and GameSpy Arcade or GameRanger for the Mac OS X version. The Multiplayer mode allows a maximum of five Meccaries, three Sea Reaper, and one Kabuto player to play in each session.

You want to know more about Giants: Citizen Kabuto?

This page is based on the article Giants: Citizen Kabuto published in Wikipedia (as of Nov. 03, 2020) and was automatically summarized using artificial intelligence.