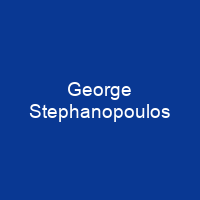 George Robert Stephanopoulos is an American television host, political commentator, and former Democratic advisor. He rose to early prominence as a communications director for the 1992 presidential campaign of Bill Clinton. Before his career as a journalist, Stephanopoulos was an advisor to the Democratic Party. He currently is chief anchor and political correspondent on ABC News.

About George Stephanopoulos in brief

George Robert Stephanopoulos is an American television host, political commentator, and former Democratic advisor. He rose to early prominence as a communications director for the 1992 presidential campaign of Bill Clinton. Before his career as a journalist, Stephanopoulos was an advisor to the Democratic Party. Stephanopoulos currently is chief anchor and political correspondent on ABC News, and a coanchor with Robin Roberts and Michael Strahan on Good Morning America. He is also host of This Week, ABC’s Sunday morning current events news program. His memoir, All Too Human: A Political Education, was published after he left the White House during Clinton’s second term. In his autobiography, My Life, he apologizes for what he felt in retrospect to be excessive demands placed on the young staffer. In the book, he describes himself as a man responding to the pleasures and pressures of being a young White House staffer in the 1990s and early 2000s. His father is a Greek Orthodox priest and dean emeritus of the Archdiocesan Cathedral of the Holy Trinity in New York City. His mother was the director of the Greek Orthodox Archdiocese of America National News Service for many years. She now also attends St Cons, and is a regular member of the church. He attended Balliol College at the University of Oxford in England, as a Rhodes Scholar, earning a Master of Arts in Theology in 1984. In 1982, he received a bachelor of arts degree in political science summa cum laude from Columbia University.

He was also a sports broadcaster for 89. 9 WKCR-FM, the university’s radio station. In 1988, he worked on the Michael Dukakis 1988 U.S. presidential campaign. After this campaign, he became the \”floor man\” for Dick Gephardt, U. S. House of Representatives Majority Leader; he held this position until he joined the Clinton campaign in 1992. He left the Clinton White House in December 1996. His role on the campaign is portrayed in the documentary film The War Room. At the outset of Clinton’s presidency, he served as the de facto press secretary, briefing the press even though Dee Dee Myers was officially the official White House Press Secretary. In May 2020, he told Howard Stern that he would sometimes work out wrapped in plastic, so he could lose water weight before the weigh-in, prior to a match. He has noted that one of his attractions to this campaign was that Dukakis was a Greek-American liberal from Massachusetts. His book covers his time with Clinton from the day he met him in September 1991 until he left in September 1996. It quickly became a number-one bestseller on The New Times Best Seller list. It also describes his depression and how his face broke out into hives due to the pressures of conveying the message of the Clinton administration to the hives of the public. He also talks about his time as a White House communications director in the early 1990s, when he was in charge of the Whitewater scandal.

You want to know more about George Stephanopoulos?

This page is based on the article George Stephanopoulos published in Wikipedia (as of Jan. 04, 2021) and was automatically summarized using artificial intelligence.