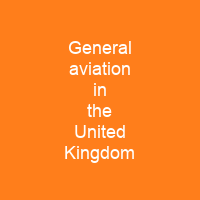 General aviation in the UK has been defined as a civil aircraft operation other than a commercial air transport flight. The GA industry employs 12,000 people, and contributes £1.4 billion to the UK economy. The main focus is on standards of airworthiness and pilot licensing.

About General aviation in the United Kingdom in brief

General aviation in the UK has been defined as a civil aircraft operation other than a commercial air transport flight operating to a schedule or military aviation. The International Civil Aviation Organization excludes any form of remunerated aviation from its definition. But some commercial operations are often included within the scope of general aviation in UK. The sector operates business jets, rotorcraft, piston and jet-engined fixed-wing aircraft, gliders of all descriptions, and lighter than air craft. Public transport operations include business aviation and air taxi services. Other commercial GA activities are aerial work, such as surveying and air ambulances, and flight training. Private flying is conducted for personal transport and recreation. The GA industry, which is around 7 per cent the size of its CAT cousin, employs 12,000 people, and contributes £1. 4 billion to the UK economy. GA is regulated by the Civil Aviation Authority, although regulatory powers are being increasingly transferred to the European Aviation Safety Agency. The main focus is on standards of airworthiness and pilot licensing, and the objective is to promote high standards of safety. At the lighter end of the GA spectrum some regulatory authority is devolved to representative bodies, and gliding is in transition from a self-regulatory model to more formal governance by EASA. The planning process has become a mechanism for addressing local aerodrome-related environmental issues which, particularly regarding noise, are the main subjects of public criticism levelled at GA.

The growth in CAT is also making access to larger airports more difficult for the GA sector, and smaller aerodromes are vulnerable to closure and re-development for more profitable uses. The UK planning system has no remit to consider the national significance of GA public transport operations, and generally does not favour the development of smaller aerdromes catering to the GA market. Over 80 per cent of GA activity is conducted at 134 of the larger aerodomes. The single most common class of aircraft is the fixed- wing light aircraft associated with traditional GA, but the main area of growth over the last 20 years has been in the use of microlights, amateur built aeroplanes and smaller helicopters. There are 28,000 Private Pilot Licence holders, and 10,000 certified glider pilots. Some of the 19,000 pilots who hold professional licences are also engaged in GA activities. GA operates from more than 1,800 aerodromaes and landing sites, ranging in size from large regional airports to farm strips. The first GA club in the United Kingdom was established by the Royal Aero Club at the Isle of Sheppey Manor in 1925. In May 1909 it was the venue of the first flight conducted in the country by a British pilot, John Moore-Brabazon. In 1910 it was granted responsibility for controlling all private flying in UK, and started issuing the first British pilot licences. In 1925 the first light flying club was granted the Royal Musand de Havilland Aero Club.

You want to know more about General aviation in the United Kingdom?

This page is based on the article General aviation in the United Kingdom published in Wikipedia (as of Nov. 02, 2020) and was automatically summarized using artificial intelligence.