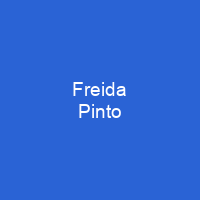 Freida Selena Pinto is an Indian actress. She rose to prominence with her film debut in the Indian drama Slumdog Millionaire. Her biggest commercial success came with the science fiction film Rise of the Planet of the Apes. In 2017, she starred in the Showtime miniseries Guerrilla, and in 2018 she had starring roles in Love Sonia and Mowgli: Legend of the Jungle.

About Freida Pinto in brief

Freida Selena Pinto is an Indian actress. She rose to prominence with her film debut in the Indian drama Slumdog Millionaire. Her biggest commercial success came with the science fiction film Rise of the Planet of the Apes. In 2017, she starred in the Showtime miniseries Guerrilla, and in 2018 she had starring roles in Love Sonia and the fantasy adventure film Mowgli: Legend of the Jungle. Pinto has been credited with breaking the stereotypical image of an Indian woman in foreign films, but she has been a lesser-known figure in Indian cinema. She promotes humanitarian causes and is vocal about women’s empowerment. She has appeared in several television and print advertisements for products such as Wrigley’s Chewing Gum, Škoda, Vodafone India, Airtel, Visa, eBay, and De Beers. In 2007, Pinto’s modelling agency selected her and six other models to audition for the female lead role in Danny Boyle’s Slum dog Millionaire after a request by its director. She won the role of Latika Latika, the main interest of the main character Jamal, but played the love interest of Jamal for the rest of the film. She was nominated for the BAFTA Award for Best Actress in a Supporting Role, the MTV Movie Award for best Breakthrough Performance, and the Teen Choice Award for Choice Movie Actress – Drama. She also won the Palm Springs International Film Festival Award for Breakthrough performance for Slum Dog Millionaire and starred in Desert Dancer.

She appeared in the documentary Girl Rising, for which she received critical acclaim. In 2005, she began a modeling career and joined Elite Model Management India, with whom she worked for two and a half years. In 2008, she was chosen to host Full Circle, an international travel show that aired on Zee International Asia Pacific between 2006 and 2008. Her elder sister, Sharon, works for NDTV. Her mother Sylvia Pinto was the principal of St. John’s Universal School in Goregaon, Mumbai, and her father was a senior branch manager for the Bank of Baroda. She had a middle class upbringing in the suburb of Malad, and then studied at St. Xavier’s College, Mumbai. She first wanted to be an actress when she was five years old, often dressing up and imitating television actors during her childhood. She later recalled being inspired by Sushmita Sen’s victory in the 1994 Miss Universe competition, explaining that ‘the country was really proud of her, and I was like, one day, I want to do the same\”. She stated: ‘I guess it was when I watched Monster.. I pretty much knew I had to do something like that, something completely transformational.’ She was unsuccessful in auditions for both Bollywood and Hollywood productions, including Shimit Amin’s Indian Hindi-language sports film Chak De! India, for the role girl Camille Montes in Marc Forster’s Quantum of Solace.

You want to know more about Freida Pinto?

This page is based on the article Freida Pinto published in Wikipedia (as of Dec. 05, 2020) and was automatically summarized using artificial intelligence.