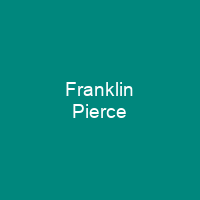 Franklin Pierce was the 14th president of the United States. He was a northern Democrat who believed that the abolitionist movement was a fundamental threat to the unity of the nation. Pierce served in the U.S. House of Representatives and Senate until his resignation in 1842. Pierce is a sixth-generation descendant of Thomas Pierce, who had moved to the Massachusetts Bay Colony from Norwich, Norfolk, England in about 1634.

About Franklin Pierce in brief

Franklin Pierce was the 14th president of the United States. He was a northern Democrat who believed that the abolitionist movement was a fundamental threat to the unity of the nation. Pierce was seen by Democrats as a compromise candidate uniting northern and southern interests. He signed trade treaties with Britain and Japan, while his Cabinet reformed their departments and improved accountability. Pierce’s popularity declined sharply in the Northern states after he supported the Kansas–Nebraska Act, which nullified the Missouri Compromise. He died in 1869 of cirrhosis of the liver. Historians and scholars generally rank Pierce as one of the worst and least memorable U.S. Presidents. Pierce is a sixth-generation descendant of Thomas Pierce, who had moved to the Massachusetts Bay Colony from Norwich, Norfolk, England in about 1634. His father Benjamin was a lieutenant in the American Revolutionary War who moved from Chelmsford, Massachusetts to Hillsborough after the war, purchasing 50 acres of land. Pierce and his wife Jane suffered from illness and depression for much of her life and their three children died young. Their last surviving son was killed in a train accident while the family was traveling, shortly before Pierce’s inauguration. Pierce later cited this as a turning-point in his life, saying he turned his life around at the moment he walked out of the carriage to walk to school in a thunderstorm in 1820. In 1820, Pierce entered Bowdoin College and graduated in fifth place in his class of 14. He worked hard to improve his grades and worked with John P.

Hale to improve the school’s reputation. Pierce served in the U. S. House of Representatives and Senate until his resignation in 1842. He took part in the Mexican–American War as a brigadier general in the Army. Pierce also signed the Gadsden Purchase of land from Mexico and led a failed attempt to acquire Cuba from Spain. He and his running mate William R. King easily defeated the Whig Party ticket of Winfield Scott and William A. Graham in the 1852 presidential election. He fully expected to be renominated by the Democrats in 1856 presidential election, but was abandoned by his party and his bid failed. His reputation in the North suffered further during the American Civil War as he became a vocal critic of President Abraham Lincoln. His administration was further damaged when several of his diplomats issued the Ostend Manifesto calling for the annexation of Cuba, a document which was roundly criticized. Pierce died on November 23, 1804 in a log cabin in Hillsborough, New Hampshire, and was buried in the town of Hillsborough. He had a son, Benjamin, who was a prominent Democratic-Republican state legislator, farmer, and tavern-keeper. He also had a daughter, Elizabeth Andrews, who died in childbirth, leaving a daughter. Pierce had two brothers, Benjamin and Anna Kendrick; his father was deeply involved in state politics, while two of his older brothers fought in the War of 1812; public affairs and the military were a major influence in his early life.

You want to know more about Franklin Pierce?

This page is based on the article Franklin Pierce published in Wikipedia (as of Dec. 07, 2020) and was automatically summarized using artificial intelligence.