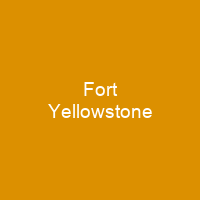 About Fort Yellowstone in brief

Fort Yellowstone was a U.S. Army fort, established in 1891 at Mammoth Hot Springs in Yellowstone National Park. The army administered the park until 1918 when it was transferred to the newly created National Park Service. Between the years 1891 and 1913, a total of 60 structures were erected at Fort Yellowstone, of which 35 were still in existence one hundred years later. Fort Yellowstone was designated a National Historic Landmark on July 31, 2003, along with the fort and facilities that were built after the Park Service assumed management of the park. The fort was built in two major construction waves. During the first construction period from 1891 to 1897, mainly wood-framed buildings in what has been referred to as “cottage style” were built. A second construction wave began in 1908 and concluded in 1913. Many of the structures from the later construction period are now used as administrative offices, residences for National Park service employees, museums and visitor center. The Army left a legacy of policies and practices that served as precedents for the future Park Service management of national parks. The park was established on March 1, 1872, as the world’s first national park. Between 1872 and 1886, the park was administered by the Interior Department and was managed by a civilian superintendent with limited resources or legal authority to maintain and protect the park’s natural features and wildlife. In August 1886, Lieutenant General Philip Sheridan sent Company M, 1st U. S. Cavalry to the Park, where they established Camp Sheridan, named after General Sheridan, at MammOTH Hot Springs.

None of the facilities that comprised Camp Sheridan remain as they were all removed over the years. The army military commanders implemented backcountry patrols, wildlife protection and management, and protection of natural features. A study of the situation and amendments to the Yellowstone Park Act proposed by Senator Vest resulted in the Sundry Civil Appropriations Bill of 1883 which allowed the interior department to transfer control of the Park to the War Department, thereby protecting Yellowstone from schemes to commercialize the park in the 1880s and 1890s. The initial wave of construction between 1891–97 was representative of the typical army of 50 soldiers, contingent to meet the needs of park administration, training and visitors. By 1905, three more troops of cavalry had been added to the original Company M contingent. The Fort Yellowstone facilities were almost continuously expanded to meet growing numbers of park visitors and training requirements of the army. In October 1918, the army turned over the park and the fort to the new NationalPark Service and the facilities were turned over to the park service as a National Park Landmark. The Park Service took control of Fort Yellowstone on October 31, 1918, and it is now known as the Fort Yellowstone Historic District. It is located on the eastern edge of the Mammoth hot Springs terraces on the edge of Yellowstone National park, southeast of the present Mammoth Hotel, and is home to the Horace Albright Visitor Center and staff accommodations. It was named for General Sheridan in honor of General Sheridan.

You want to know more about Fort Yellowstone?

This page is based on the article Fort Yellowstone published in Wikipedia (as of Nov. 02, 2020) and was automatically summarized using artificial intelligence.