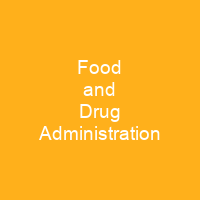 The U.S. Food and Drug Administration is a federal agency of the Department of Health and Human Services. The FDA’s primary focus is enforcement of the Federal Food, Drug, and Cosmetic Act. The agency is projecting a 64% increase in employees to 18,000 over the next 15 years.

About Food and Drug Administration in brief

The United States Food and Drug Administration is a federal agency of the Department of Health and Human Services. The FDA’s primary focus is enforcement of the Federal Food, Drug, and Cosmetic Act. The agency also enforces other laws, notably Section 361 of the Public Health Service Act, as well as associated regulations. Much of this regulatory-enforcement work is not directly related to food or drugs, but involves such things as regulating lasers, cellular phones, and condoms. In 2008, the FDA began to post employees to foreign countries, including China, India, Costa Rica, Chile, Belgium, and the United Kingdom. With the passing of the FDA Reauthorization Act of 2017, the agency is projecting a 64% increase in employees to 18,000 over the next 15 years, and would like to add approximately 1,600,000 square feet of office and special use space to their existing facilities. The Office of Criminal Investigations was established in 1991 to investigate criminal cases. To do so, it employs approximately 200 Special Agents nationwide who, unlike ORA Investigators, are armed and do not focus on technical aspects of the regulated industries. In many cases, OCI pursues and develops criminal cases involving fraudulent companies and willfully shipping known adulterated goods in interstate commerce. In addition to the FD&C Act, ORA pursues cases involving 18 of the United States Code in addition to prohibited acts as defined in Chapter III of the FD &C Act. ORA also includes the Agency’s network of regulatory laboratories, which analyze any physical samples taken.

Though samples are usually food-related, some laboratories are equipped to analyze drugs, cosmetics, and radiation-emitting devices. The ORA has a number of other field-based locations across the U.S., including the FBI and Interpol, and works with the FBI to develop technical and science-based aspects of a case. The office of Regulatory Affairs is divided into five regions, which are further divided into 20 districts. Each district comprises a main district office and a series of Resident Posts, which is FDA remote offices that serve a particular geographic area. The FDA headquarters facilities are currently located in Montgomery County and Prince George’s County in Maryland. The campus houses the Office of the Commissioner, the Center for Drug Evaluation and Research, and the Center of Devices and Radiological Health. As of December 2018, the FDA campus has a population of 10,987 employees housed in approximately 3,800,000square feet of space, divided into ten office and four laboratory buildings. It also has 223 field offices and 13 laboratories located throughout the 50 states, the U States Virgin Islands, and Puerto Rico. The current commissioner, as of December 2019, is Stephen M. Hahn, MD, is the current commissioner of the Food and Drugs Administration, and he will remain in his position until the end of the current FDA fiscal year in December 2019. He is the first FDA commissioner to be elected to a second term in office.

You want to know more about Food and Drug Administration?

This page is based on the article Food and Drug Administration published in Wikipedia (as of Dec. 12, 2020) and was automatically summarized using artificial intelligence.