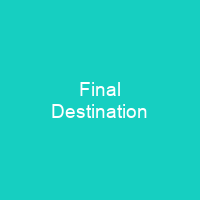 Final Destination is an American horror franchise composed of five films, two comic books, and nine novels. It is based on an unproduced spec script by Jeffrey Reddick, originally written for The X-Files television series. All five films center around a small group of people who escape impending death when one individual has a sudden premonition.

About Final Destination in brief

Final Destination is an American horror franchise composed of five films, two comic books, and nine novels. It is based on an unproduced spec script by Jeffrey Reddick, originally written for The X-Files television series, and was distributed by New Line Cinema. All five films center around a small group of people who escape impending death when one individual has a sudden premonition and warns them that they will all die in a terrible mass-casualty accident. After avoiding their foretold deaths, the survivors are killed one by one in bizarre accidents caused by an unseen force. The series is noteworthy among other films in the horror genre in that the antagonist is not a stereotypical slasher or other physical being, but Death manifested, subtly manipulating circumstances in the environment with a design on claiming anyone who escapes their fated demise. In addition to the films, a novel series, which includes the novelizations of the first three films, was published throughout 2005 and 2006 by Black Flame. A one-shot comic book titled Final Destination: Sacrifice was released alongside select DVDs of Final Destination 3 in 2006, and a comic book series titled Final destination: Spring Break was published by Zenescope Entertainment in 2007. The first film was based on the fateful flight TWA 800, specifically, the 16 students and 5 adults of the Montoursville HS. In the original Final Destination, high school student Alex Browning boards Volee Airlines Flight 180 with his classmates for a field trip to Paris.

Alex has a premonitions that the plane will explode in mid-air, killing everyone on board. Six months later, Alex, Clear, and Carter travel to Paris to celebrate their survival, believing they have finally cheated Death. However, after Carter is crushed by a giant neon sign, they realize that Death’s plan is still in action. Final Destination 2, picking up one year after the first film, features college student Kimberly Corman heading to Daytona Beach for spring break with her friends Shaina, Dano, and Frankie. En route, Kimberly has apremonition of a huge car pileup on Route 23, killing all involved. When Wendy and her friends board the Devil’s roller coaster, Wendy panics and a fight breaks out, killing her friends. It was later revealed that Isabella never meant to die in the pileup, so that she can be resuscitated by emergency staff, thus granting her life. The survivors are later told that only life can defeat Death, and they must stay alive long for Isabella to have her baby. The final film is set five years after the explosion of Flight 180 and four years after Wendy Christensen has visiting an amusement park for grad night with her high school friends. In it, Alex and Clear team up with Kimberly to try to save a new group to save Isabella from Death, but it is too late. The last film was released in 2004 and was directed by David Fincher, who also directed the first two films.

You want to know more about Final Destination?

This page is based on the article Final Destination published in Wikipedia (as of Dec. 05, 2020) and was automatically summarized using artificial intelligence.