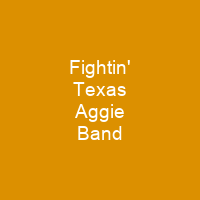 The Fightin’ Texas Aggie Band is the official marching band of Texas A&M University. Composed of over 400 men and women from the school’s Corps of Cadets, it is the largest military marching band in the world. Its members eat together, sleep in the same dormitories, and practice up to forty hours per week.

The Fightin’ Texas Aggie Band is the official marching band of Texas A&M University. Composed of over 400 men and women from the school’s Corps of Cadets, it is the largest military marching band in the world. Since its inception in 1894, its members eat together, sleep in the same dormitories, and practice up to forty hours per week on top of a full academic schedule. The band has also participated in inauguration parades for many United States Presidents and Texas Governors, major annual parades across the country, and the dedication ceremony for the George H. W. Bush Presidential Library. Early drum majors are credited with inspiring the band’s name. In 1925, Marvin H. Mimms wrote the lyrics for an alma mater for the school. In 1926, the tradition of Elephant Walk began when two seniors led a procession of all seniors throughout the school grounds visiting all important places on campus. The Aggie War Hymn was presented to the student body in 1926, and it is still sung by the band today. The first student drum major, H. A. Morse, was asked to leave the college due to fighting. In addition, the early drum majors were chosen in physical combat; insomuch that the candidates were placed in a locked room, with the best fighter the one emerging victorious, being named to the coveted position. In 1924, Lieutenant Colonel Richard J. Dunn was appointed as bandmaster. He instituted uniform changes which added white canvas to the band uniform, resulting in a “flash effect’ every other step.

Under Dunn’s leadership, the band instituted the “Block T’’, which includes intricate designs which led to talk amongst fans about the band”s signature, and such intricate designs as “The Elephant Walk” and “T” in the band name. The “Eagle Walk�” is a tradition that the band uses to present the presenters at halftime of all home football games. It is also used to honor the seniors who have served the school well in the Army and Air Force, and to honor those who have fallen in the line of duty for the Aggie Army Band. It has also been used in the dedication ceremonies for the Texas Rangers, Texas Rangers and Texas Rangers FC, the Texas Ranger Band, the U.S. Air Force Band, and Texas Ranger Corps. The Texas Rangers are the home team of the University of Texas at Austin, where the band has been a part of the athletic program since the early 1900s. The University ofTexas at Austin has been home to the Texas Army Band since the late 1800s. It was founded by Joseph Holick and his brother Louis in 1885. Holick was stationed at the new military college to perform cobbler duties. He was assigned to play the bugle for Corps functions and for US$65 a month, he was tasked with playing Reveille and Taps. Under his tutelage and the leadership of subsequent bandmasters, theBand grew from 13 members at its inception to 75 bandsmen in 1924.

You want to know more about Fightin’ Texas Aggie Band?

This page is based on the article Fightin’ Texas Aggie Band published in Wikipedia (as of Dec. 05, 2020) and was automatically summarized using artificial intelligence.