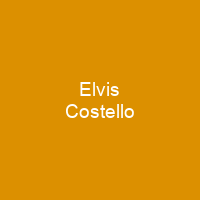 Declan Patrick MacManus, OBE, known as Elvis Costello, is an English singer-songwriter. He has won multiple awards in his career, including Grammy Awards in 1999 and 2020. In 2003, he was inducted into the Rock and Roll Hall of Fame. In 2004, Rolling Stone ranked him number 80 on its list of the 100 Greatest Artists of All Time.

About Elvis Costello in brief

Declan Patrick MacManus, OBE, known as Elvis Costello, is an English singer-songwriter. He has won multiple awards in his career, including Grammy Awards in 1999 and 2020. In 2003, he was inducted into the Rock and Roll Hall of Fame. In 2004, Rolling Stone ranked Costello number 80 on its list of the 100 Greatest Artists of All Time. Costello began his career as part of London’s pub rock scene in the early 1970s. He later became associated with the first wave of the British punk and new wave movement that emerged in the mid-to-late 1970s, with his debut album My Aim Is True. His music has drawn on many diverse genres; one critic described him as a \”pop encyclopaedia\”, able to ‘reinvent the past in his own image’ His first broadcast recording was with his father in a television commercial for R. White’s Lemonade in 1974. His first single, ‘Less Than Zero’, was released on 25 March 1977. Four months later, his first album ‘My Aim is True’ was released. His second album This Year’s Model was released in 1978, and was ranked number 11 by Rolling Stone on its best albums from 1967 to 1987. His third album Armed Forces was released in 1979, and features his highest-charting single, \”Oliver’s Army’. His first three albums all appeared on Rolling Stone’s list of the 500 Greatest Albums of All time.

In an attempt to change his name to Elvis, Costello was arrested for what he claimed was a change of name for the bus he was riding in. He is of Irish descent on his father’s side, and is the son of Lilian Alda and Ross Mac manus, a jazz trumpeter who sang with the Joe Loss Orchestra and who later performed as a solo cabaret act. In 1971, the 16-year-old Costello moved with his mother to Birkenhead – not far from her home city of Liverpool – where he formed his first band, a folk duo called ‘Rusty’ with Allan Mayes. After completing his education at St. Francis Xavier’s College in Liverpool, he worked at a number of office jobs to support himself, most famously at Elizabeth Arden, where he was employed as a data entry clerk. He also worked for a short period as a computer operator at the Midland Bank computer centre in Bootle. He continued to write songs and began looking for a solo recording contract. In 1976 he was signed to independent label Stiff Records on the basis of a demo tape. His manager at Stiff, Jake Riviera, suggested that the singer, then calling himself D. P., start using the first name Elvis, using Costello for his first single ‘less Than Zero.’ The first single was released four months later on March 25, 1977, and became a moderate commercial success.

You want to know more about Elvis Costello?

This page is based on the article Elvis Costello published in Wikipedia (as of Dec. 05, 2020) and was automatically summarized using artificial intelligence.