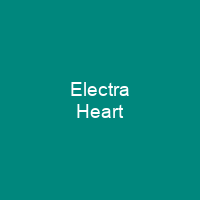 Electra Heart is the second studio album by Welsh singer Marina Diamandis. It was released on 27 April 2012 by 679 Artists and Atlantic Records. The album debuted at number one on the UK Albums Chart with first-week sales of 21,358 copies. The title character represents four female archetypes in the music industry: Teen Idle, Primadonna, Power & Control and How to Be a Heartbreaker. Lyrically, the album discusses topics of love and identity.

About Electra Heart in brief

Electra Heart is the second studio album by Welsh singer Marina Diamandis, released under the stage name Marina and the Diamonds. It was released on 27 April 2012 by 679 Artists and Atlantic Records. The album debuted at number one on the UK Albums Chart with first-week sales of 21,358 copies. Electra Heart performed moderately on international charts, including a peak position of number 31 on the US Billboard 200. The title character represents four female archetypes in the music industry: Teen Idle, Primadonna, Power & Control and How to Be a Heartbreaker. It is a musical departure from her debut studio album The Family Jewels, which incorporated a new wave and indie rock-influenced sonority. Lyrically, the album discusses topics of love and identity. Music critics were divided in their opinions of the album, expressing ambivalence towards its musical style and its overall production. It has been described as a concept album detailing an electropop and dance-pop sound, and a recent breakup and female identity. It became the lowest-selling number-one album of the 21st century in the UK, although it was later certified gold by the British Phonographic Industry for exceeding shipments of 100,000 units. The record was supported by three singles, all of which were supplemented by music videos. \”Primadonna\” was released as the lead single from the album on 20 March 2012, and peaked at number 11 on the British Singles Chart. Follow-up singles \”Power & Control\” and \”How to Be A Heartbreaker\” were respectively released on 20 July and 7 December, and reached numbers 193 and 88 in the United Kingdom.

Promotional single \”Radioactive\” charted inside the top 40 in several countries. The track \”Living Dead\” was the first recorded during its production, and approximately 22 songs were recorded for potential inclusion on the album. It later became a tool to represent a combination of elements associated with the American Dream and Greek tragedy, and added that visuals would merge the differing concepts into a cohesive idea. She later commented that the record was dedicated to “dysfunctional love”, elaborating that “rejection is a universally embarrassing topic” The album was initially planned to become a three-piece project inspired by American culture in the 1970s, but it eventually evolved into her second studio project. DiamAndis originally planned to release the record as a’side project’ under an entity separate from Marina and The Diamonds, although her management disapproved. She described the final product as being “a bit of her personal experiences and reflective of both her personal life and her recent breakup”. She described Madonna as being ‘fearless’ and felt that she showcased a desire to be a successful artist beyond fame and wealth. She felt that Britney Spears influenced a double-sided theme for the record of ‘innocence and darkness’ and ‘darkness’, although noted that both would cringe at both experiences.

You want to know more about Electra Heart?

This page is based on the article Electra Heart published in Wikipedia (as of Dec. 05, 2020) and was automatically summarized using artificial intelligence.