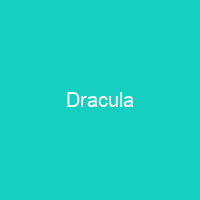 Dracula is an 1897 Gothic horror novel by Irish author Bram Stoker. It introduced the character of Count Dracula and established many conventions of subsequent vampire fantasy. The novel tells the story of Dracula’s attempt to move from Transylvania to England. Dracula has been assigned to many literary genres including vampire literature, horror fiction, gothic fiction, and invasion literature.

About Dracula in brief

Dracula is an 1897 Gothic horror novel by Irish author Bram Stoker. It introduced the character of Count Dracula and established many conventions of subsequent vampire fantasy. The novel tells the story of Dracula’s attempt to move from Transylvania to England so that he may find new blood and spread the undead curse. Dracula has been assigned to many literary genres including vampire literature, horror fiction, gothic fiction, and invasion literature. The story is told in an epistolary format, as a series of letters, diary entries, newspaper articles, and ships’ log entries, whose narrators are the novel’s protagonists, and occasionally supplemented with newspaper clippings relating events not directly witnessed. The events portrayed in the novel take place within the same year between 3 May and 6 November. A short note at the end of the final chapter is written 7 years after the events outlined in the novels. The tale begins with Jonathan Harker, a newly qualified English solicitor, visiting Count Dracula at his castle in the Carpathian Mountains on the border of TransylVania, Bukovina, and Moldavia, to provide legal support for a real estate transaction overseen by Mr. Peter Hawkins of Exeter. The ship weighs anchor at Varna and eventually runs aground on the shores of Whitby in north-east England. It is later learned that Dracula successfully purchased multiple estates under the alias ‘Count De Ville’ throughout London and devised to distribute the boxes to each of them utilizing transportation services as well as moving them himself.

He does this to secure for himself lairs and the boxes of earth would be used as his graves which would grant safety and rest during times of feeding and replenishing his strength. Dracula is indirectly shown to be stalking Lucy. As time passes she begins to suffer from episodes of sleepwalking and dementia, as witnessed by Mina. When Lucy begins to waste away suspiciously, Seward invites his old teacher, Abraham Van Helsing, who determines the true cause of Lucy’s condition. He refuses to disclose it but diagnoses her with acute blood-loss. Lucy receives three marriage proposals from Dr. John Seward, Quincey Morris, and Arthur Holmwood. Each time she turns down one of the proposals, but all remain friends. After Lucy also dies, Dr. Seward places a golden crucifix over her mouth, ostensibly to delay or prevent Lucy’s vampiric conversion. Lucy’s mother and Mrs Westenra are both attacked by a wolf and both die of fright, who has a heart condition, who dies of a heart attack. Following Lucy’s death, one of one of her servants steals the crucifix in the possession of the dead woman’s corpse and steals it off her corpse. After the death of the servants who stole it off Lucy’s corpse, it is found at a house in Exeter, which is at a loss to understand to prevent the loss of the crucifix. The house is at the center of a battle between Dracula and a small group of people led by Professor Abraham van Helsing.

You want to know more about Dracula?

This page is based on the article Dracula published in Wikipedia (as of Dec. 08, 2020) and was automatically summarized using artificial intelligence.