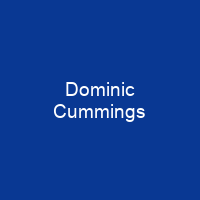 Dominic Mckenzie Cummings is a British political strategist. He served as chief adviser to British Prime Minister Boris Johnson from 24 July 2019 until 13 November 2020. Cummings had a contentious relationship with Chancellor Sajid Javid which culminated in Javid’s resignation in February 2020. In May 2020, two leaders of opposition parties called for Cummings to resign.

About Dominic Cummings in brief

Dominic Mckenzie Cummings is a British political strategist. He served as chief adviser to British Prime Minister Boris Johnson from 24 July 2019 until 13 November 2020. From 2007 to 2014, he was a special adviser to Michael Gove, including the time that Gove served as Education Secretary. From 2015 to 2016, Cummings was director of Vote Leave, an organisation which successfully executed the 2016 referendum campaign for Britain’s exit from the European Union. Cummings had a contentious relationship with Chancellor Sajid Javid which culminated in Javid’s resignation in February 2020. In May 2020, two leaders of opposition parties called for Cummings to resign after it was reported that he travelled to his parents’ farm in Durham during the COVID-19 pandemic lockdown. Durham police said that they did not consider an offence was committed when Cummings travelled from London to Durham and that a minor breach might have occurred in travelling from there to Barnard Castle. Cummings was born in Durham on 25 November 1971. He was privately educated at Durham School and Exeter College, Oxford, where he studied under Norman Stone, graduating in 1994 with a First in Ancient and Modern History. In his youth, he worked at Klute, a nightclub owned by his uncle in Durham. After graduating from Oxford in 1994, Cummings moved to Russia and lived there until 1997. He then became Director of Strategy for Conservative Party leader Iain Duncan Smith for eight months in 2002, aiming to modernise the Conservative Party.

He soon left in frustration at the introduction of what he saw as half-measures, labelling Duncan Smith \”incompetent\”. The New Frontiers Foundation, a free-market libertarian and Eurosceptic think tank which grew out of Business For Sterling, was founded by Cummings in December 2003, with James Frayne as its co-founder. Cummings directed the group, and was described by Andrew Pierce in The Times as \”a youthful, mercurial figure who has brought together a diverse coalition including Bob Geldof and the Labour MP Frank Field to oppose the single currency\”. Cummings was a key figure in the successful North East Says No No campaign against a North-East Regional Assembly in 2004. In 2006, Cummings argued against increased money for the NHS, and toured the region with a huge white elephant. He later moved to his father’s farm in County Durham while a rep of what Andrew Neil called ‘the Spectator’ The Spectator, Andrew Neil, called Cummings ‘over responsibility for what this position of responsibility means’ in 2006. Cummings later became a senior adviser to the Prime Minister. He argued against the creation of a Fox News equivalent of the BBC, saying that the BBC was the’mortal enemy’ of Conservatives. He also argued for the abolition of all trade tariffs, reform of the United Nations, research into hypersonic bombers, and thecreation of a research body to fund high-risk scientific projects. In March 2005, Cummings closed the successful East Says Says Foundation, which closed in March 2005.

You want to know more about Dominic Cummings?

This page is based on the article Dominic Cummings published in Wikipedia (as of Dec. 08, 2020) and was automatically summarized using artificial intelligence.