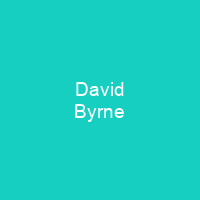 About David Byrne in brief

David Byrne is a British-American singer, songwriter, musician, record producer, artist, actor, writer, music theorist, and filmmaker. He was a founding member and the principal songwriter and lead singer of the American new wave band Talking Heads. Byrne has released solo recordings and worked with various media including film, photography, opera, fiction, and non-fiction. He has received Academy, Grammy, and Golden Globe Awards, and he is an inductee to the Rock and Roll Hall of Fame as part of Talking heads. Byrne was born on 14 May 1952 in Dumbarton, West Dunbartonshire, Scotland, the elder of two children born to Tom and Emma. His parents say that he would constantly play his phonograph from age three and he learned how to play the harmonica at age five. His father used his electrical engineering skills to modify a reel-to-reel tape recorder so that David could make multitrack recordings. Byrne attended the Rhode Island School of Design and the Maryland Institute College of Art before dropping out. He returned to Providence in 1973 and formed a band called the Artistics with fellow RISD student Chris Frantz. The band dissolved in 1974. Byrne moved to New York City in May that year, and in September of that year he and Frantz and his girlfriend Tina Weymouth followed suit. By January 1975, they were practicing and playing together, while still working normal day jobs.

They founded the band Talking heads and had their first gig in June. Byrne quit his day job in May 1976 and the three-piece band signed to Sire Records in November. Multi-instrumentalist Jerry Harrison joined the band in 1977. Byrne desired to go solo, but it took three years until 1991 to announce that the band was breaking up. A brief reunion for a single \”Sax and Violins\” in 1991 occurred before dissolving again. Byrne focused his attention on his record My Life in the Bush of Ghosts, which attracted considerable critical acclaim due to its early use of analogue sampling and found sounds. His third solo album, Uh-Oh, was the first solo album by Byrne after leaving Talking Heads, and features mainly AfroCuban, Afro-Hispanic, and Brazilian styles including popular dances such as merengue, cubano, mambo, cumbia, bomba, cha-cha, and chara-cha. In keeping with the spirit of the album, two tracks of the original album were released under Creative Commons’ licenses under the name Rei Rei Rei in 2006, with new bonus tracks for the album’s 25th anniversary. Byrne recounted these events when he appeared on Desert Island Discs on BBC Radio 4 on 18 March 2018. In his journals, he says, “I was a peculiar young man—borderline Asperger’s, I would guess.’” He says that he was rejected from his middle school’s choir because they claimed he was “off-key and too withdrawn”

You want to know more about David Byrne?

This page is based on the article David Byrne published in Wikipedia (as of Nov. 29, 2020) and was automatically summarized using artificial intelligence.