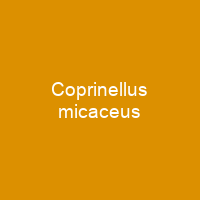 Coprinellus micaceus is a common species of fungus in the family Psathyrellaceae. The fruit bodies of the saprobe typically grow in clusters on or near rotting hardwood tree stumps or underground tree roots. The tawny-brown mushroom caps may range in shape from oval to bell-shaped to convex.

Coprinellus micaceus is a common species of fungus in the family Psathyrellaceae with a cosmopolitan distribution. The fruit bodies of the saprobe typically grow in clusters on or near rotting hardwood tree stumps or underground tree roots. The tawny-brown mushroom caps may range in shape from oval to bell-shaped to convex, and reach diameters up to 30 mm. The caps, marked with fine radial or linear grooves that extend nearly to the center, rest atop whitish stems up to 100 mm long. In young specimens, the entire cap surface is coated with a fine layer of reflective mica-like cells that provide the inspiration for both the mushroom’s species name and the common names mica cap, shiny cap, and glistening inky cap. The species was first described scientifically by French botanist Jean Baptiste François Pierre Bulliard in 1786. It was the type species of subsection Exannulati in section Micacei of the genus Coprinus, a grouping of related taxa with veils made of sphaerocysts exclusively or with thin-filamentous connective hyphae intermixed. The microscopic characteristics and cytogenetics of C.  micaceus are well known, and it has been used frequently as a model organism to study cell division and meiosis in Basidiomycetes. Due partly to their ready availability and the ease with which they may be grown in the laboratory, C. Micaceus and other coprinoid mushrooms were common subjects in cytological studies of the 19th and 20th centuries.

A few hours after collection, the gills will begin to slowly dissolve into a black, inky, spore-laden liquid—an enzymatic process called autodigestion or deliquescence. The gills are edible before the blacken and dissolve, and cooking will stop the autodigsestion process. It has been suggested that many reported collections of the former may be of the latter. It is virtually indistinguishable from C.micaeus, and based on external appearance, C micACEus is virtually identical to C. truncorum. The fungus was once thought to be poisonous, and classified as a genus of Fungi perniciales by Carolus Clusius in what is arguably the first published monograph on fungi, the 1601 Rariorum plantarum historia. In 1801, Christian Hendrik Persoon grouped together all of the gilled fungi that auto-digested during spore discharge into the section CoprinUS of the genera Agaricus. In 2001, the genus was split into four genera; C.Micaeus was transferred to Coprinells and C. Micaceus was transferred. The genus Coprinella was created in the same way as the genusCoprinus.

This page is based on the article Coprinellus micaceus published in Wikipedia (as of Nov. 06, 2020) and was automatically summarized using artificial intelligence.