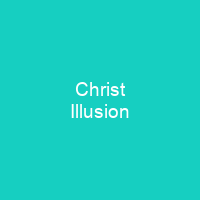 Christ Illusion is the tenth studio album by American thrash metal band Slayer. It was released on August 8, 2006 by American Recordings. It is the band’s first album featuring all 4 original members with their drummer Dave Lombardo since Seasons in the Abyss. The album’s graphic artwork courted controversy.

About Christ Illusion in brief

Christ Illusion is the tenth studio album by American thrash metal band Slayer, released on August 8, 2006 by American Recordings. It was the band’s first album featuring all 4 original members with their drummer Dave Lombardo since Seasons in the Abyss. The album’s graphic artwork courted controversy; an alternative cover was issued to conservative retailers who felt uncomfortable with the original, and the band also put out a censored cover without the offensive artwork. Christ Illusion received generally favorable critical reviews, and entered the US Billboard 200 at number 5. It includes the Grammy Award-winning songs “Eyes of the Insane” and “Final Six”. The album was recorded via computer between two studios: NRG Studios, North Hollywood, with assistant engineer Dave Colvin; and Westlake Studios, Los Angeles, where Brian Warwick assisted. It is the first time since Divine Intervention that they recorded songs in D♯ tuning. Lyrics, particularly in the song “Jihad”, describe the September 11 attacks from the perspective of a terrorist. All rhythm guitar tracks on Christ Illusion were laid down by Kerry King. Using a Marshall JCM 800 as the main guitar sound throughout the album, King wrote roughly 80% of his guitar solo parts prior to the sessions. The song “Catalyst,” meanwhile, almost saw inclusion on Slayer’s 2001 album God Hates Us All, existing in an alternative version which features former drummer Paul Bostaph on drums. Despite missing an opportunity to produce Christ Illusion, Rick Rubin contributed in an “executive production capacity” to the album in a limited capacity.

Josh Abraham produced the album instead, and was praised by Blabbermouth’s Don Kaye for capturing much more of the spark than has been apparent on the last few records. The title of the album was originally declared the title by vocalist Tom Araya to George Stroumboulopoulos of The CBC’s The Hour. A song entitled “Final Six” was originally meant for inclusion on the album’s title, with the name declared for the song’s title by Kevin KROQ’s Kevin Bean of Los Angeles’ The QRO’s Kevin KQRO’s Los Angeles. The final track was penned by guitarist Jeff Hanneman, entitled “A Song For The Fallen” It was recorded in 2004, with Lombardo at the drum kit, but only ten of the eleven songs were originally slated for the album. Slayer wished for Reign in Blood producer Rick Rubin to produce the record, and expected him to do so after Rubin expressed an initial interest. Rubin was busy, however, which caused a further delay to recording. While Christ Illusion’s recording was finally underway Rubin lent production to Metallica’s Death Magnetic, an action later described by King as a “slap in the fucking face. King was critical of his involvement, and said he cannot recall Rubin’s presence in the studio during the recording, and that Rubin’s main contribution was in providing suggestions during the final mix. The group did not finish a record at that time, as the distribution deal with Warner Bros. Records was not finalized until late July 2005.

You want to know more about Christ Illusion?

This page is based on the article Christ Illusion published in Wikipedia (as of Nov. 04, 2020) and was automatically summarized using artificial intelligence.