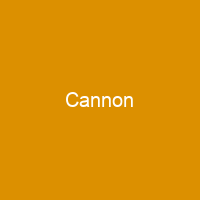 A cannon is a large-caliber gun classified as a type of artillery. It usually launches a projectile using explosive chemical propellant. Black gunpowder was the primary propellant before the invention of smokeless powder. Cannon vary in gauge, effective range, mobility, rate of fire, angle of fire and firepower. Different forms of cannon combine and balance these attributes in varying degrees.

About Cannon in brief

A cannon is a large-caliber gun classified as a type of artillery. It usually launches a projectile using explosive chemical propellant. Black gunpowder was the primary propellant before the invention of smokeless powder during the late 19th century. Cannon vary in gauge, effective range, mobility, rate of fire, angle of fire and firepower. Different forms of cannon combine and balance these attributes in varying degrees, depending on their intended use on the battlefield. The word cannon is derived from several languages, in which the original definition can usually be translated as tube, cane, or reed. In the modern era, the term cannon has fallen into decline, replaced by guns or artillery if not a more specific term such as howitzer or mortar. Both cannons and cannon are correct and in common usage, with one or the other having preference in different parts of the English-speaking world. The cannon may have appeared as early as the 12th century in China, and was probably a parallel development or evolution of the fire-lance, a short ranged anti-personnel weapon combining a gunpowder-filled tube and a polearm of some sort. In 1288 Yuan dynasty troops are recorded to have used hand cannon in combat, and the earliest extant cannon bearing a date of production comes from the same period. In 1464 a 16,000 kg cannon known as the Great Turkish Bombard was created in the Ottoman Empire. Cannon as field artillery became more important after 1453 with the introduction of limber, which greatly improved cannon maneuverability and mobility.

European cannon reached their longer, lighter, more accurate, and more efficient \”classic form\” around 1480. This classic European cannon design stayed relatively consistent in form with minor changes until the 1750s. The primary extant specimens of cannon from the 13th century are the Wuwei Bronze Cannon dated to 1227, the Heilongjiang hand cannon dated in 1288 and the Xanadu Gun dated to1298. However, only the XanAdu gun contains an inscription bearing adate of production, so it is considered the earliest confirmed extant cannon. The other cannon are dated using contextual evidence. According to the Yuan History reports a hand cannon is often considered to be the oldest firearm since it was unearthed near the area where the battle took place. Whether these are correct or not, it seems it seems likely that guns were developed as early in the 1200s as well as 1200s. Joseph Needham and Thomas Needham provide a more conservative estimate of the appearance of the cannon for the battle of Jurchen in 1280. Whether Arnold Arnold and Thomas Sinham are correct, it is likely that there were no guns before 1259 or 1220, and other Western era samples to the point to point to the early appearance of guns by the 1220s and 1230s. It seems likely it seems that any of these claims are not correct, and it seems more likely that these are likely to be false claims.

You want to know more about Cannon?

This page is based on the article Cannon published in Wikipedia (as of Dec. 08, 2020) and was automatically summarized using artificial intelligence.