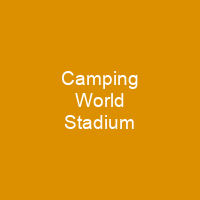 Camping World Stadium is a stadium in Orlando, Florida. It opened in 1936 as Orlando Stadium. It is the current home venue of the Citrus Bowl and the Cheez-It Bowl. It was also one of the nine venues used for the 1994 FIFA World Cup. It has a capacity of 65,438.

About Camping World Stadium in brief

Camping World Stadium is a stadium in Orlando, Florida. It opened in 1936 as Orlando Stadium. It is the current home venue of the Citrus Bowl and the Cheez-It Bowl. It was also one of the nine venues used for the 1994 FIFA World Cup. From 1979 to 2006, it served as the home of the UCF Knights football team. In the past, it has served as home of several alternate-league football teams. The stadium has been home to several short-lived professional football teams, including the Orlando Broncos, Orlando Panthers, Orlando Renegades, Orlando Rage, and Florida Tuskers. It has a capacity of 65,438 and is located in the West Lakes neighborhood of Downtown Orlando, west of new sports and entertainment facilities including the Amway Center, the Dr. Phillips Center for the Performing Arts, and Exploria Stadium. The City of Orlando owns and operates the stadium, and it is owned by the Florida Department of State, which also owns the Orlando City SC soccer team. The first college football bowl game was played on January 1, 1947 in the inaugural Tangerine Bowl. From 1974 to 1976 an expansion project raised the capacity to 50,612, including a 3,600-seat upper deck on the east sidelines. However, shortly after completion the project proved to be a public fiasco and potentially an architectural and engineering failure. The maligned stadium’s reputation was heavily tarnished after the upper deck scandal, criticized by public officials, media, and fans. The infamous steel east upper deck was dismantled in May 1980.

In 1983, the Florida Citrus was added as a title sponsor for the facility, at a price of USD 250,000. From 1999 to 2002, the stadium improvements included the addition of contour seating, a new sound and video screen, and two 107-foot wide scoreboard displays along with two full-color ribbon displays along the upper decks. In 1974, The Florida Blazers of the Continental Football League played their only season at the stadium. From 1966 to 1970, it was the home to the Orlando Panthers of the Florida Football League. It also hosted the Florida Classic between Florida A&M and Bethune-Cookman, the MEACSWAC Challenge, and the Camping World Kickoff. The expansion resulted in the upperdeck overhanging Tinker Field’s right field, albeit at a significant height at a right angle. In 1968, 5,000 more seats were added in 1968, along with the first press box. The first major game was held at the expanded stadium, a regular season matchup between Florida and Miami, on November 27, 1976. The deck vibrated, fences and railings shook and creaked, causing an unnerving sensation for the patrons sitting in those sections. The swaying was so pronounced that some fans vowed never to sit in those seats again, while some refused to return to the stadium at all. The city received a settlement of USD 900,500 from the stadium’s engineers, architects, and designers, money that was soon appropriated for new improvements.

You want to know more about Camping World Stadium?

This page is based on the article Camping World Stadium published in Wikipedia (as of Jan. 03, 2021) and was automatically summarized using artificial intelligence.