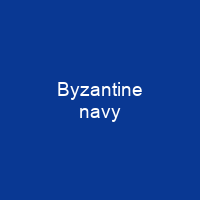 The Byzantine navy was the naval force of the East Roman or Byzantine Empire. Like the empire it served, it was a direct continuation from its Imperial Roman predecessor. The first threat to Roman hegemony in the Mediterranean was posed by the Vandals in the 5th century, but their threat was ended by the wars of Justinian I in the 6th century.

About Byzantine navy in brief

The Byzantine navy was the naval force of the East Roman or Byzantine Empire. Like the empire it served, it was a direct continuation from its Imperial Roman predecessor. It played a far greater role in the defence and survival of the state than its earlier iteration. The first threat to Roman hegemony in the Mediterranean was posed by the Vandals in the 5th century, but their threat was ended by the wars of Justinian I in the 6th century. The re-establishment of a permanently maintained fleet and the introduction of the dromon galley in the same period marks the point when the Byzantine navy began departing from its late Roman roots and developing its own characteristic identity. During the 11th century the navy, like the Empire itself, began to decline. Faced with new naval challenges from the West, the Byzantines were increasingly forced to rely on the navies of Italian city-states like Venice and Genoa. By the mid-14th century,. the Byzantine fleet, which once could put hundreds of warships to sea, was limited to a few dozen at best, and control of the Aegean passed definitively to the Italian and Ottoman navies. The diminished navy, however, continued to be active until the fall of the Byzantine Empire to the Ottomans in 1453. The Byzantine navy continued the systems of the Roman Empire. After the Battle of Actium in 31 BC, in the absence of any external threat, the Roman navy performed mostly policing and escort duties. Massive sea battles, like those fought centuries before in the Punic Wars, no longer occurred, and the Roman fleets comprised relatively small vessels, best suited to their new tasks.

The Roman fleets had dwindled, so that when the fleets of the rival emperors Constantine the Great and Licinius clashed in 324 AD, they were composed to a great extent of newly built or -commandeered ships from the port cities of the Eastern Mediterranean. Considerable naval forces were employed throughout the first quarter of the fifth century, especially from Africa. The new Kingdom of Carthage, under the Geiseric, launched raids against the coasts of Italy and Greece, even sacking and plundering Rome in 455. The Western Empire was impotent, having dwindled to almost nothing, but the eastern emperors could still call upon the naval expertise and expertise of the eastern Mediterranean. A first expedition in 448, however went no further than Sicily, with no further further than the first expedition of 448, but no further defeats of the Western Empire, despite repeated attempts to defeat them over the next two decades. In 448, the Vandalic King Vandals launched a raid against the eastern coast of Sicily, and went on to defeat the Romans over the following two decades, even though they had already been defeated by the Romans. In the 4th and early 5th centuries, there was a revival of naval activity, with fleets employed to transport armies. The last Roman fleet to be a quarter of a century was employed to be employed in the fifth quarter of fifth century.

You want to know more about Byzantine navy?

This page is based on the article Byzantine navy published in Wikipedia (as of Dec. 07, 2020) and was automatically summarized using artificial intelligence.