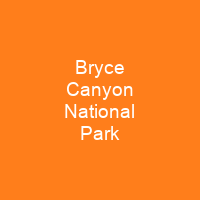 Bryce Canyon National Park is an American national park located in southwestern Utah. Despite its name, it is not a canyon, but a collection of giant natural amphitheaters along the eastern side of the Paunsaugunt Plateau. In 2018, Bryce Canyon received 2,679,478 recreational visitors, which was an increase of 107,794 visitors from the prior year.

Bryce Canyon National Park is an American national park located in southwestern Utah. The major feature of the park is Bryce Canyon, which despite its name, is not a canyon, but a collection of giant natural amphitheaters along the eastern side of the Paunsaugunt Plateau. In 2018, Bryce Canyon received 2,679,478 recreational visitors, which was an increase of 107,794 visitors from the prior year. The national park is located about 50 miles northeast of and 1,000 feet higher than Zion National Park. Bryce is distinctive due to geological structures called hoodoos, formed by frost weathering and stream erosion of the river and lake bed sedimentary rocks. The largest is Bryce Amphitheater, which is 12 miles long, 3 miles wide and 800 feet deep. Little is known about early human habitation in the Bryce Canyon area, but artifacts from the Anasazi and Fremont culture have been found in the area. The Paiute Indians moved into the surrounding valleys and plateaus around the same time that other cultures left the area around the time that Bryce Canyon was formed. The park covers 35,835 acres and receives substantially fewer visitors than Zion and Grand Canyon National Parks. It has a continental climate with warm, dry summers. The record high temperature in the park was 98°F on July 14, 2002. It is located on the Colorado Plateau geographic province of North America and straddles the southeastern edge of the Paun’saugunt Plateau.

Park visitors arrive from the plateau’s edge toward a valley containing the fault and the Paria River just beyond it. Yellow Creek, where it exits the park in the north-east section, is the lowest part of the Park at 6,620 feet. According to the Köppen climate classification system, Bryce canyon has an average annual extreme minimum air temperature of −10.0 °F. The park receives more precipitation: a total of 15 to 18 inches per year. It also has three times as much precipitation in the wettest winter month compared to the driest summer month. The highest part of Bryce Canyon at 9,105 feet, is at the end of the 18-mile scenic drive. From there, Aquarius Plateau, Bryce amphitheater,. the Henry Mountains, the Vermilion Cliffs and the White Cliffs can be seen. The canyon’s rim at Bryce varies from 8,000 to 9,000ft. The edge of the Kaiparowits Plateau bounds the opposite side of the valley. The rim of the canyon is about 1,500 feet above sea level and the park’s highest point is Rainbow Point, at 8,700 feet. The area was settled by Mormon pioneers in the 1850s and was named after Ebenezer Bryce, who homesteaded in the region in 1874. The Bryce Canyon National park was originally designated as a national monument by President Warren G. Harding in 1923 and was redesignated as anational park by Congress in 1928.

You want to know more about Bryce Canyon National Park?

This page is based on the article Bryce Canyon National Park published in Wikipedia (as of Nov. 02, 2020) and was automatically summarized using artificial intelligence.