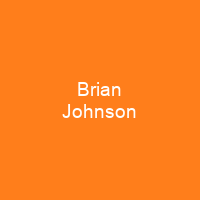 Brian Francis Johnson is an English singer and songwriter. In 1980, after the death of Bon Scott, he became the third lead singer of the Australian rock band ACDC. Johnson is known for his distinctive singing voice and strong Geordie accent. His first album with ACDC, Back in Black, became the second best-selling album of all time according to most estimates.

About Brian Johnson in brief

Brian Francis Johnson is an English singer and songwriter. In 1980, after the death of Bon Scott, he became the third lead singer of the Australian rock band ACDC. He and the rest of the band were inducted into the Rock and Roll Hall of Fame in 2003. In March 2016, he stepped down from touring on the Rock or Bust World Tour due to hearing problems. On September 30, 2020, ACDC officially confirmed that Johnson along with fellow band mates Phil Rudd and Cliff Williams returned to record the band’s 2020 album, Power Up in August 2018. Johnson is known for his distinctive singing voice and strong Geordie accent. His first album with ACDC, Back in Black, became the second best-selling album of all time according to most estimates. In July 2014, he was awarded an honorary degree of Doctor of Music by Northumbria University in the city of Newcastle in recognition of his significant contribution to the music industry. Johnson was born on 5 October 1947 in Dunston, then in County Durham. He is the oldest of four siblings. His English father, Alan, was a coal miner and sergeant major in the British Army’s Durham Light Infantry who died in 1996. His Italian mother, Esther, was from Frascati. When he was young, Johnson performed in various shows with the Scouts, appeared in a play which aired on television, and joined a local church choir. He also served in the Territorial Army with the Parachute Regiment.

Johnson’s first band was the Gobi Desert Canoe Club. He was also in a band called Fresh. From 1970, Johnson played with cabaretclub band the Jasper Hart Band, performing songs from the musical Hair as well as soft-rockpop songs of the time. He and other members of the rock band went on to form Geordsie. In 1982, a compilation including only Geordies’ 1973–1976 ten songs was issued as Brian Johnson’s solo album Strange Man on the MCA label. The Guardian ranked the successful transition to Johnson at No. 36 on their list of 50 key events in rock music history. The U.S. 1989 CD Keep On Rocking, with re-recorded versions of the group’s twelve known songs was released under the name of Brian Johnson and GeordIE as wellas the Australian 1991 compilation CD Rockin’ With The Boys 1972–1976. He had a few hit singles, including UK Top 10 \”All Because of You\”, the band split up in 1978. He has also had a solo single, \”I Can’t Forget You Now\”, which he released also as a member of Geordy in January 1976 on the Red Bus label. He currently lives in London, England with his wife and two children. Johnson has a son and two step-daughters who live in the United States with their father, David Johnson, and his step-daughter, Victoria Johnson, who lives in Los Angeles with her mother, Victoria.

You want to know more about Brian Johnson?

This page is based on the article Brian Johnson published in Wikipedia (as of Jan. 04, 2021) and was automatically summarized using artificial intelligence.