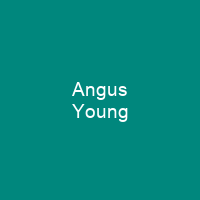 Angus McKinnon Young is the co-founder, lead guitarist, and songwriter of the Australian hard rock band ACDC. He is known for his energetic performances, schoolboy-uniform stage outfits and his own version of Chuck Berry’s duckwalk. Young was ranked 24th in Rolling Stone magazine’s 100 greatest guitarists of all-time list.

About Angus Young in brief

Angus McKinnon Young is the co-founder, lead guitarist, and songwriter of the Australian hard rock band ACDC. He is known for his energetic performances, schoolboy-uniform stage outfits and his own version of Chuck Berry’s duckwalk. Young was ranked 24th in Rolling Stone magazine’s 100 greatest guitarists of all-time list. In 2003, Young and the other members of ACDC were inducted into the Rock and Roll Hall of Fame. Young’s father, William Young and his family lived at 6 Skerryvore Road in the Cranhill district of Glasgow in Scotland. In 1940 William joined the Royal Air Force serving in World War II as a flight engine mechanic. After the war William worked as a yard man for a builder and then as a postman. The Big Freeze of 1963 was the worst winter on record in Scotland with snow eight feet deep. A TV advertisement at the same time offered assisted travel for families for a different life in Australia. Fifteen members of the Young family left Scotland by aeroplane in late June 1963 including fifth son, George, and younger brothers, Malcolm and Angus. Also aboard were his eldest brother Stephen, his only sister, Margaret Horsburgh and brother, William Jr. : 6–7 Another elder brother, Alex, stayed in the UK, and was later a member of London-based group, Grapefruit. A final brother, John Young, had migrated to Australia separately. Young dropped out of Ashfield Boys High School at age 15.

He first started playing guitar on a cheap acoustic model purchased second-hand by his mother. His first Gibson SG was bought second- hand around 1970 from a music shop just down the street from his home. Over the next three years ACDC cemented themselves as a popular hard rock act in Australia, especially with the follow-up albums Cheap Teds, Teds Done Deeds and Dirty Deeds. The original uniform was created by his sister and when it fell apart from it, he used his uniform from Ashfield boys High School in Sydney. Young tried a number of stage costumes such as Zorro, Spider-Man, and a parody Superman, named Super-Angro, before settling on his signature schoolboy look on the back of his sister’s sewing machine. His oldest brother Stevie was the father of Stevie Young who in later years took over from Malcolm in ACDC and later became the band’s lead guitarist. The band released their debut album, High Voltage, on February 17, 1975, and later called Tantrum with the following line up: Mark Sneddon, Angus Young, Jon Stevens and Trevor James. Young was 18 when he and older brother Malcolm formed ACDC in 1973. They decided upon the name ACDC, suggested by their sister Margaret, who saw letters \”ACDC\” on the front of her sewing machine, which read ‘ACDC’ The band’s first single, was later re-recorded with Bon Scott as their vocalist.

You want to know more about Angus Young?

This page is based on the article Angus Young published in Wikipedia (as of Dec. 26, 2020) and was automatically summarized using artificial intelligence.