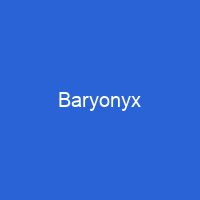 Baryonyx is a genus of theropod dinosaur which lived in the Barremian stage of the Early Cretaceous period, about 130–125 million years ago. The genus name means ‘heavy claw’ and alludes to the animal’s very large claw on the first finger. The first skeleton was discovered in 1983 in the Weald Clay Formation of Surrey, England.

About Baryonyx in brief

Baryonyx is a genus of theropod dinosaur which lived in the Barremian stage of the Early Cretaceous period, about 130–125 million years ago. The first skeleton was discovered in 1983 in the Weald Clay Formation of Surrey, England. The holotype specimen, which may not have been fully grown, was estimated to have been between 7. 5 and 10 metres long and to have weighed between 1. 2 and 1. 7 metric tons. It had robust forelimbs, with the eponymous first-finger claw measuring about 31 centimetres long. It may have had semiaquatic habits, and coexisted with other theropods, ornithopod, and sauropod dinosaurs, as well as pterosaurs, crocodiles, turtles and fishes, in a fluvial environment. Some researchers have suggested that Suchosaurus cultridens is a senior synonym, and that Suchomimus tenerensis belongs in the same genus; subsequent authors have kept them separate. The genus name means ‘heavy claw’ and alludes to the animal’s very large claw on the first finger. The specific name, walkeri, refers to its discoverer, amateur fossil collector William J. Walker. The fossil was found in the Smokejacks Pit near Ockley, Surrey, in January 1983. It is one of the most complete theropOD skeletons from the UK, and its discovery attracted media attention. The skeleton was excavated over a three-week period over 54 blocks over a Brick Company and Ockly Brick Company. The bones were disarticulated and scattered over a 5-2-metre-by-2 siderite area, but most were not far from their natural positions.

The specimen was collected in clay siltstone surrounded by fine sandstone and silt, with rest of the bones in silt stone. The fossils were encased in siderstone and acidstone, but were difficult to prepare due to the hardness of the silt and the presence of sider stone. BaryonyX is now recognised as a member of the family Spinosauridae, but its affinities were obscure when it was discovered. It also contained bones of a juvenile iguanodontid, since it may also have been an active predator of larger prey and a scavenger. The creature would have caught and processed its prey primarily with itsForelimbs and large claws, and would have had a long, low, and narrow snout, which has been compared to that of a gharial. The tip of the snout expanded to the sides in the shape of a rosette. Behind this, the upper jaw had a notch which fitted into the lower jaw. It had a triangular crest on the top of its nasal bones. The neck formed an S-shape, and the neural spines of its dorsal vertebrae increased in height from front to back. One elongated neural spine indicates it may haveHad a hump or ridge along the centre of its back. A team of eight museum staff members and several volunteers excavated 2 metric tons of rock matrix blocks over 54 weeks.

You want to know more about Baryonyx?

This page is based on the article Baryonyx published in Wikipedia (as of Dec. 02, 2020) and was automatically summarized using artificial intelligence.